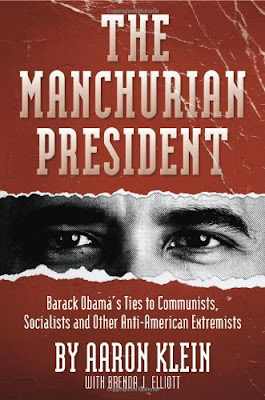 American journalist, author and radio host, Aaron Klein, along with historian and researcher, Brenda J. Elliott blow the lid off the dome of silence surrounding the Obama administration as they boldly unmask the nation’s 44th president in their latest chilling monograph entitled. “The Manchurian President: Barack Obama’s Ties to Communists, Socialists and Other Anti-American Extremists” (WND Books – May 2010). Providing close to 900 footnotes and countless pages of documentation they reveal surreptitious ties to radical leftists of all stripes.

While Klein does not infer that President Obama is part of a Communist sleeper cell, he does present an exhaustive investigation into President Obama’s background and his radical ties to pivotal figures in the Communist movement, both inside the White House and out who also happen to be major players in crafting legislation, including the economic stimulus package. This weighty tome weaves a complex spider’s web of a narrative that is replete with a plethora of names and organizations of radical leftists, hitherto unknown by the public who helped shape Obama’s ideology and career.

This meticulously documented piece of outstanding investigative research is a must read for all good citizens of this great country who are concerned with the future of our cherished freedoms and values.
Posted by Donna Sorensen/jas2maui at 1:43 PM