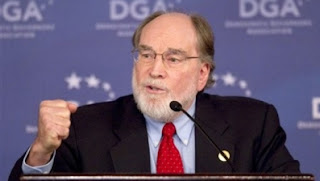 A celebrity journalist now claims he misspoke when he said last week that Hawaii’s governor told him he was unable to find President Barack Obama’s original birth certificate after a search of state and hospital archives.

Mike Evans told FoxNews.com on Wednesday he was remorseful and embarrassed that he appeared to have given the impression that he had discussed the search for Obama’s birth certificate with Hawaii Gov. Neil Abercrombie.  Read More
Posted by Donna Sorensen/jas2maui at 7:52 PM


The daunting numbers mean that the government will have to borrow 40 cents for every dollar it spends.

The new Congressional Budget Office estimates will add fuel to a raging debate over cutting spending and looming legislation that’s required to allow the government to borrow more money as the national debt nears the $14.3 trillion cap set by law. Republicans controlling the House say there‘s no way they’ll raise the limit without significant cuts in spending, starting with a government funding bill that will advance next month.

The CBO analysis predicts the economy will grow by 3.1 percent this year, but that joblessness will remain above 9 percent this year. Dauntingly for President Obama, the nonpartisan agency estimates a nationwide unemployment rate of 8.2 percent on Election Day in 2012.  Read More
Posted by Donna Sorensen/jas2maui at 11:54 AM

"As a matter of basic logic, how could the biggest deficit-spender in American history reverse course and become a responsible fiscal hawk?"

Posted by therightscoop on Jan 26, 2011
Levin: Obama is still the one he’s been waiting for

Levin writes this morning his insightful analysis of Obama and his SOTU speech. Bottom line is that Obama hasn’t changed one bit even though the political world is talking as though he has:

"President Obama’s foot remains where it has been since the day he entered the Oval Office, on the gas pedal. He’s not braking for anyone or anything. All this pre-SOTU spin from Obama’s whisperers, gobbled up by the Obama-hungry media, was always nonsense. Obama has no intention of touching entitlements in any significant way, period. Why would he tamper with the New Deal and Great Society when he considers them a good start but insufficiently bold to advance his statist beliefs? Obama has no intention of honestly working with Republicans on health care, cap-and-trade, etc. These are hallmarks of his transformative agenda. They define him and his presidency. His bureaucracy is working overtime to institute them."
Read More
Posted by Donna Sorensen/jas2maui at 9:09 AM