The ‘Lesser Of Two Evils’ Con-Game 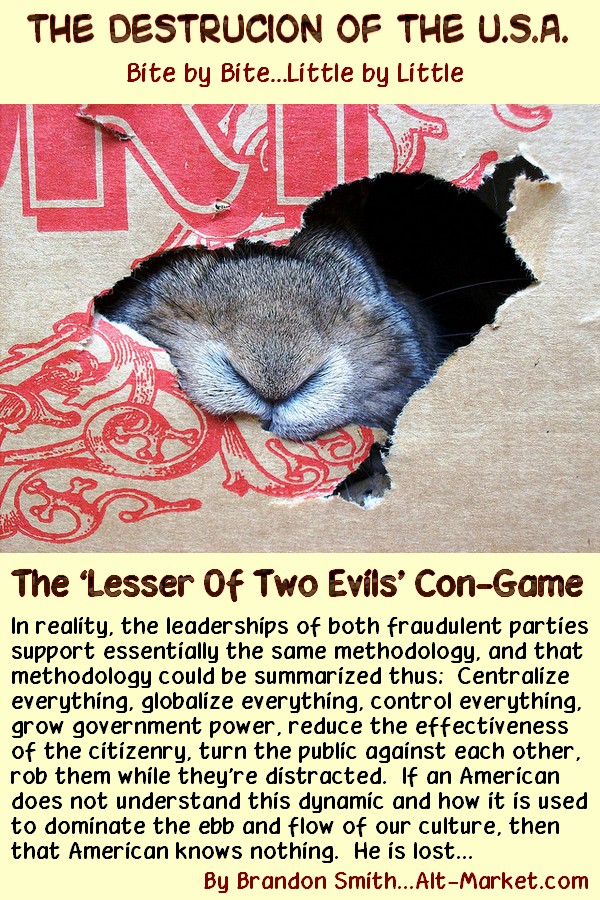 The moral relativism of the “lesser of two evils” philosophy has been draining the heart and soul of America for decades.  Many of us in the Liberty Movement understand that it is nothing new, and have come to expect the abusive and emaciated logic it entails from time to time.  However, over the course of the past year it has become apparent to me that the talking points and propaganda that drive the hypocritical worldview are being utilized on an even grander scale than ever before.  This fact struck me quite sharply while attending a local GOP Lincoln/Reagan dinner event while I was attempting to gauge the overall danger our country would be facing from potential RINO (Republican In Name Only) sellouts as well as what our hopes were for a possible political solution at the local and state level.  The “conservative” rally was, to say the least, disappointing.

One thing that stood out plainly at this event, though, was that there was an overall template; an action plan, a message that had been pre-engineered.  Someone had sent out a memo, or an email, or a guide, or perhaps beamed talking points directly into the cyborg brains of these political hacks.  Their rhetoric was repetitive and uniform and dry like elbow skin.  The demand was clearly stated; regardless of who won the Republican Primaries, no matter how unprincipled, how unconstitutional, how despicable, it was our “duty” as conservatives to back them through the national elections.  Obama and the Democrats had to be defeated at all costs…

Now, one of the first tenets or rules that a person learns when delving into the Liberty Movement is that there is no such thing as political parties in America today.  There are no conflicting interests in Washington D.C.  There is no “grand battle” between left and right for the minds of the masses.  It is a sham.  A con.  A fantasy.  A false paradigm.

In reality, the leaderships of both fraudulent parties support essentially the same methodology, and that methodology could be summarized thus:  Centralize everything, globalize everything, control everything, grow government power, reduce the effectiveness of the citizenry, turn the public against each other, rob them while they’re distracted.  If an American does not understand this dynamic and how it is used to dominate the ebb and flow of our culture, then that American knows nothing.  He is lost…  Read More