"The main street was a total war zone, it was smoke, it was rocks being thrown, it was Molotov cocktails, it was flames, it was live fire,” Polkot recalled.

Posted on February 6, 2011
by Meredith Jessup

While anti-government protests continue in Egypt, many international journalists have retreated from the frontlines after being threatened and, in many cases, detained by authorities. As we reported last week, a Fox news reporter and cameraman were confronted by a large contingent of pro-government demonstrators and savagely beaten.

Fox News correspondent Greg Palkot and cameraman Olaf Wiig have since returned to London. In the first interview following their ordeal, the two recounted the frightening experience for Fox News on Sunday.

“The main street was a total war zone, it was smoke, it was rocks being thrown, it was Molotov cocktails, it was flames, it was live fire,” Polkot recalled.

“I got grabbed and I thought at that moment, I thought, ‘Ok, I’m really now in trouble,’” Wiig added.

Posted by Donna Sorensen/jas2maui at 7:59 PM 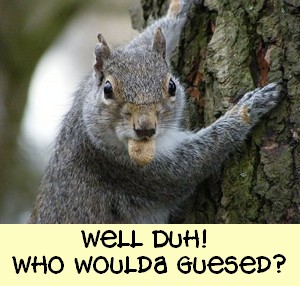 Bill O’Reilly’s Sunday interview with Barack Obama revealed a president who has not changed course from the path of the last two years—contrary to the conventional wisdom on both left and right in Washington.

On the revolution sweeping Egypt and other Middle Eastern capitals, President Obama still cannot articulate what U.S. interests are and how he will use tools available to him to advance those interests.

This could be as easy as saying, "we stand with those seeking democracy, we insist that the dictator of Egypt leave, and we will oppose and work against the Islamists who want an even worse alternative to existing repression." Read More

White House distances itself from its own envoy to Egypt 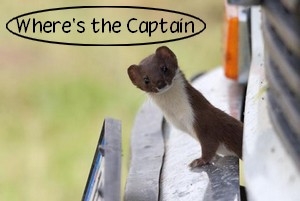 Almost a week ago, the Obama administration decided to get off the fence on Egypt and start pushing for Hosni Mubarak to resign as president of Egypt. On Tuesday night, Barack Obama told the US that Mubarak needed to transition to a new government that had support from the people, and he sent Frank Wisner to Egypt to send the message to Mubarak personally. Wisner, however, sent an entirely different message back to the US:

The latest challenge came Saturday afternoon when the man sent last weekend by President Obama to persuade the 82-year-old leader to step out of the way, Frank G. Wisner, told a group of diplomats and security experts that “President Mubarak’s continued leadership is critical — it’s his opportunity to write his own legacy.”

Jake Tapper, David Kerley, and Kirit Radia report for ABC that the White House began distancing itself from its own special envoy:  Read More
Posted by Donna Sorensen/jas2maui at 2:01 PM

Why America goes to war 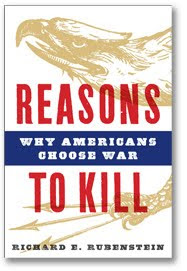 Why go to war when a peaceful resolution to a conflict may still be an option? Richard Rubenstein, a professor at George Mason University’s Institute for Conflict Analysis and Resolution, has spent a career trying to answer that question and to find ways to inspire a reflex toward peace over violence. In “Reasons to Kill: Why Americans Choose War,” just released by Bloomsbury Press, he explains why ordinary Americans follow their leaders into battle even when war is difficult to justify. Here, he outlines five traditional justifications for war – and why they should stir skepticism.

Since 1950, the United States has spent more than 20 years at war, with military operations killing more than a hundred thousand Americans, wounding at least five times that number, and consuming several million foreign lives. We have been fighting continuously since 2001 with no end to the violence in sight.

The question that most wants answering at this point is not why our leaders go to war but why we so often follow them into battle. Some commentators think that Americans are innocent dupes, people who will buy anything, including war, if it is cleverly packaged and sold. Others insist that since the early days of our republic we have been a nation of frontier warriors eager to prove our manliness in battle.

Each of these theories contains a piece of the truth but misses the most important point: we are a religious people who will not fight unless first convinced that war is morally justified. (This is why virtually every American war has spawned a significant anti-war movement.)

Self-defense: We are under attack and have a sacred right and duty to defend ourselves.

Evil enemy: A diabolical enemy – one who wishes us harm because of his evil nature – exists and must be destroyed if we are to remain safe and free.

Humanitarian duty: We are morally obligated to rescue the victims of atrocious oppression from tyrants who violate their human rights.

Patriotism: Loving America means being willing to fight for the nation when asked to make this sacrifice.

Last resort: War is necessary because the enemy has refused to negotiate or cannot be trusted to adhere to diplomatic agreements.

These principles have often been invoked to induce us to participate in unnecessary and unjust wars. That is why each one should trigger a series of skeptical questions.

Claims of self-defense should make us ask who, exactly, is threatening us and what the threat consists of. If U.S. troops occupying another nation are attacked by local insurgents, is a war of counter-insurgency needed to defend our nation or merely to secure some imperial outpost?

Similarly, even though a figure like Saddam Hussein or Osama bin Laden is declared an evil enemy, we still need to ask what, exactly, motivates his hostility and what non-violent policies and actions on our part might undermine his sources of support and make us safer.

Humanitarian duty is often invoked to convince us to intervene to save oppressed peoples. But if we assume that America alone is capable of liberating the oppressed without becoming a new oppressor, we make the fatal assumption of our unique virtue and fruitlessly deny our own “dark side.” This is why, following the Spanish-American War, we repeated in the Philippines the worst excesses of the Spanish counter-insurgency campaign in Cuba, killing more than 200,000 Filipinos in the process.

Patriotism does not necessarily mean fighting for one’s country; it means doing what is best for America and the world, which often requires working for peace rather than participating in war.

And, most U.S. wars have not been justified by the principle of last resort. Not only have our own leaders often refused to negotiate, they have not yet learned to use the methods of conflict resolution to discover and eliminate the underlying causes of war.

Americans are neither gullible dupes nor frontier warriors. But we have too often abandoned our usual hard-headed skepticism when asked to support U.S. military campaigns abroad in the name of patriotism. There is an antidote to this – the “I’m from Missouri, show me!” attitude exhibited by great patriots from John Quincy Adams and Abraham Lincoln to Mark Twain, Jeannette Rankin, David Dellinger and Dennis Kucinich.

It’s not too late to regain our balance and end America’s unnecessary wars. 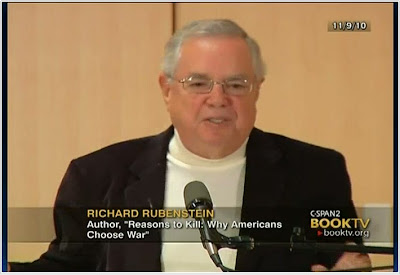 Richard Rubenstein, conflict resolution and public affairs professor at George Mason University, reports on why he believes Americans are amenable to the notion of war. Mr. Rubenstein argues that the U.S. government sells war to the populace and he examines the ways that involvement in foreign conflicts are proposed to the nation. Richard Rubenstein discussed his book at the Cambridge Public Library in Cambridge, Massachusetts.

To Watch Full Discussion  http://www.c-spanvideo.org/program/KillW
Posted by Donna Sorensen/jas2maui at 10:15 AM