Which Republican Can Beat Obama? 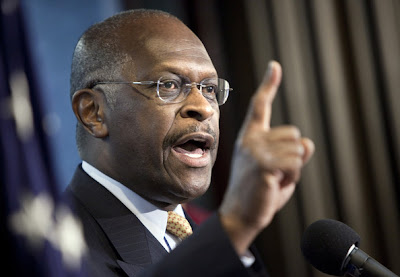 I love Michele Bachmann. I'd vote for Sarah Palin in a heartbeat. In fact, I'd pull the lever for any Republican candidate for President, though I'd have to hold my nose for the more moderate ones.

But who do I think could actually win against the Obama machine? A strong black man. . as in the brainy, charismatic Herman Cain.

One of the things I've been doing since I woke up from my leftist coma three or so years ago is closely observing Obama. I've been trying to figure out what makes the man tick.

My guess is that Obama had a terrible childhood, worse than we know. I wouldn't be surprised if there was quite a bit of abuse, as well as neglect. We all know about the continual abandonments.

Without much nurturance, but given the illusion of greatness by others, Obama has developed a Messiah Complex. He thinks he walks on water. There are not too many mere mortals who could intimidate him.

Obama made mincemeat of Hillary. While I am a huge Sarah fan, I think he'd do the same to her. The genial and gracious Michele -- he'd descend on her like a vulture. A white male, a Native American man. . . all the same. He and his handlers would chew them up and spit them out. But it would be different with an African American alpha male.

I think that someone like Cain could and would put Obama in his place. And though Obama would pounce on Cain, Obama's bark would be worse than his bite.

My guess is that Obama would feel weak around him; Obama would become the beta male he truly is deep inside, though he hides it. It's not a coincidence that Obama chose dominant black men as father figures such as Frank Marshall Davis and Rev. Wright. Read More
Posted by Donna Sorensen/jas2maui at 10:02 AM