President Obama's executive order suspending deportation of illegal immigrants shows that his legal principles (for lack of a better term since he seems devoid of any identifiable ones) and ideology suit him better to head the anarchist Occupy Wall Street movement than to be President of the United States.

Not long ago he said he lacked the legal authority for this unilateral act because of laws on the books. In one stroke of the pen, however, he showed he's not just a progressive tyrant and lawbreaker, but an anarchist too. He fits with the amorphous, confused, coercive, reactionary and largely lawless ideology of the #Occupy movement.

The inconsistency of his action versus his prior statement indicates that he simply doesn't care how he achieves his agenda. His vision of legal restraints is consistent with the anarchist Occupy philosophy, including, "[t]he refusal to accept the legitimacy of the existing legal order."  Read More
Posted by Donna Sorensen/jas2maui at 11:41 AM

Lanai may be sold by end of week 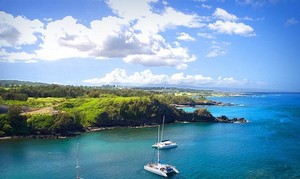 The island of Lanai could be under new ownership by the end of the week, according to Mayor Alan Arakawa.

Lanai's billionaire owner, David Murdock, put the island up for sale late last year. Arakawa said he's been kept in the loop on potential offers, and negotiations with a serious buyer seem close.

"They currently have someone that is interested, and I'm pretty sure that, one way or the other, the sale will close fairly soon," Arakawa said. "There may be something that happens by the end of this week, if it goes through."

The asking price is reportedly between $500 million and $600 million.  Read More
Posted by Donna Sorensen/jas2maui at 11:24 AM