Zakaria wants to change the Constitution to ‘fix’ our national and senatorial elections to make them more democratic. He doesn’t like the Electoral College and he doesn’t like the fact that every state has the same amount of senators despite the population of the people. He cites that Constitution has been changed 27 times and that unlike the founders who created a new document in Philadelphia instead of using the Articles of Confederation, he just wants to make a small change to it.

Levin decided Zakaria needed a lesson in America and proceeded to explain why we hold our elections the way we do, noting that Presidents and Senators were never meant to be directly elected by the population. It was all a apart of what made us a Republic. He continued on with the issue of slavery (as cited by Zakaria) and it blossomed into a great monologue about why the founders worked so hard to create the America we know and love.

TO LISTEN
Posted by Donna Sorensen/jas2maui at 11:42 AM

TSA Showdown a Watershed Moment in Battle For Freedom 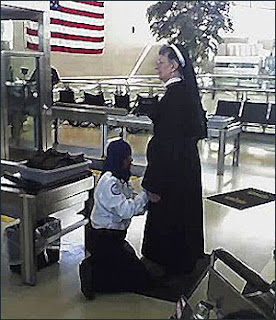 A bill that would criminalize invasive TSA pat downs in Texas has risen like a phoenix from the flames, with Governor Rick Perry being forced to include the item on the agenda for the current special session of the legislature, setting the stage for what could potentially become a watershed moment in the battle to peel back a federal power grab that has characterized the advance of big government.

Despite initially shirking responsibility by erroneously claiming that the bill did not have enough support to pass, Governor Perry was forced to place the item on the special session agenda yesterday, meaning TSA workers could face a year in jail or a $4,000 fine if they “touch the anus, sexual organ, buttocks, or breast of another person, even through that person’s clothing for the purpose of granting access to a building or a form of transportation,” according to the text of the legislation.
Read More
Posted by Donna Sorensen/jas2maui at 9:58 AM