Something is wrong with Barack Obama. We all know it. We all see it. When he speaks about America, Americans cringe. There is a strangeness to his manner, an unease when he talks about America. He appears awkward and uncomfortable. His speech seems performed and practiced yet, oddly halting. It's reminiscent of American POW's in Vietnam or Iraq reading a forced confession. His eyes, expressions, and vocal tone are disconnected from his words. The words themselves often sound American, but the delivery is clinical and detached. His attempts at patriotic sentiment ring hollow and phony. "Once again, with feeling!" is how Americans are left feeling. He just doesn't seem right. He doesn't seem like, well...one of us.

Before anyone "goes there" and makes accusations of racism, this is about a pervasive, nagging, national perception that Barack Obama does not intuitively understand or appreciate America or Americans. Not our past. Not our present or future. He just doesn't act or sound like an American. In fact, there are good reasons and ample evidence for why.

For many of us, "being an American" was a normal part of our collective upbringing. We learned it in school. We said the Pledge of Allegiance every morning right alongside our teachers. Even in liberal Southern California the day began with the Pledge often followed by singing "God Bless America" or "America the Beautiful." Annual "Flag Ceremonies" were held with quotations from the Declaration of Independence and patriotic songs performed by the student body, in public, for parents and passersby to enjoy. There were even songs that mentioned God. Christmas was celebrated, in school. It was understood that God was integral to the founding of America and that The Creator was the true source of our liberties. Schools reinforced parental authority, being a good citizen, and responsibility to God. Religion was never preached or taught, but it was also never denigrated and never censored. Read More
Posted by Donna Sorensen/jas2maui at 11:59 PM

War from inside the belly of the beast

Brasscheck TV
Colonel Lawrence Wilkerson: “It’s all about the money”

An amazingly frank admission from the former Chief of Staff of Colin Powell, also a former instructor at the Naval War College, about why the US goes to war.

Hint: It’s not about truth, justice or protecting the American Way.
Must watching and must forwarding, especially now that the US is starting a new war almost every other week.

Posted by Donna Sorensen/jas2maui at 1:06 PM

Tripping Up The TSA

"Yet, on the bright side, overt obstructionism by “judges” in favor of the burgeoning national para-military police state can only draw the entire judiciary’s credibility and even legitimacy into question—for which the “judges” have no answer that any thinking American will accept. And the sooner the last vestige of credence is stripped from rogue jurists, the sooner Americans will realize what other steps need to be taken to bring this situation under control." 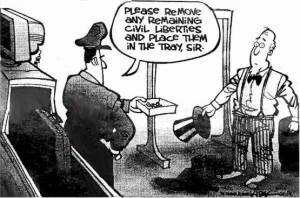 It seems as if every day someone posts on the Internet a new video documenting the ever-escalating level of oppressive police-state behavior from the TSA. In many of these instances, TSA officials explicitly are heard making the claim that, because flying on a commercial air carrier is supposedly a “privilege”, rather than a “right”, passengers can be required to surrender their constitutional rights under the Fourth Amendment (and, presumably, under all other provisions of the Constitution as well) in order to be allowed to enter the supposedly “secured” areas of a terminal or to board a flight. Passengers are told that they have no justifiable complaint against the ill treatment they receive at the blue-gloved hands of the Blueshirts, because by entering the terminal they have implicitly agreed to “conditions” that are imposed on all airline travelers. This rationalization has been put forward on numerous occasions by various higher-ups in the TSA, and by their apologists in the big media, as well.

Unfortunately, as with most pronouncements on constitutional matters emanating from public officials and their shills these days, this claim is more than simply lame. It is an affront to the intelligence of every American.  Read More
Posted by Donna Sorensen/jas2maui at 11:37 AM

Levin said Michele Bachmann has a higher IQ than Obama – even before his cocaine using days.

Mark Levin said Wallace’s apology was not sincere.
It wasn’t. In fact it took 30 hours for Wallace to finally call Michele Bachmann and apologize over the phone.
The Right Scoop reported:


Levin was not happy with the way Wallace basically called Bachmann a flake yesterday and said we must respond if we want these unfair attacks on conservatives to stop. He defended Bachmann by talking about her career and suggested that she probably has a higher IQ than Obama, even before he used cocaine. Ouch!
He goes on to say that there is no way Wallace would have referred to a liberal, especially a minority in those terms and goes even further to say that the only reason Wallace apologized is because the people rose up in anger, not because of his own sensibilities.

Posted by Donna Sorensen/jas2maui at 10:53 AM

June 28, 2011The Blaze
The ATF Agent who has been loudly criticizing the “Project Gunrunner” scandal has received his walking papers, and he says its a clear case of government retaliation against a whistleblower.

Agent Vince Cefalu, who has worked for the ATF for 24 years, was effectively terminated last week, pending appeal while he is on paid administrative leave. Here he is on Fox Business:

Read More
Posted by Donna Sorensen/jas2maui at 10:48 AM

FOIA documents reveal how “large number of workers have been falling victim to cancer, strokes and heart disease”
June 28, 2011
By Paul Joseph Watson

Fearful of provoking further public resistance to naked airport body scanners, the TSA has been caught covering up a surge in cases of TSA workers developing cancer as a result of their close proximity to radiation-firing devices, perhaps the most shocking revelation to emerge from the latest FOIA documents obtained by the Electronic Privacy Information Center.

After Union representatives in Boston discovered a “cancer cluster” amongst TSA workers linked with radiation from the body scanners, the TSA sought to downplay the matter and refused to issue employees with dosimeters to measure levels of exposure.

The documents indicate how, “A large number of workers have been falling victim to cancer, strokes and heart disease.”  Read More
Posted by Donna Sorensen/jas2maui at 10:39 AM

There are those who love freedom of expression, as long as it’s not conservatives who are doing the expressing. Just ask Glenn Beck. On radio Tuesday, he told the stunning story of how he and his family were harassed during an outdoor movie in New York City’s Bryant Park.

For those unfamiliar with Bryant Park, it hosts weekly showings of classic films during the summer months. Attendees bring blankets and picnic dinners and sprawl out on the park’s great lawn while watching the films on a giant screen.

As Beck explained, he attended Monday night‘s public showing of Alfred Hitchcock’s “The 39 Steps” with his wife and daughter. During the film, he was ridiculed, had someone “kick a cup” of wine on his wife and on his blanket, and even witnessed another person stand up and yell, “We hate conservatives here!”

“These people were some of the most hateful people I have ever seen,” Beck said. “All I wanted to do is go out on a blanket with my family and have dinner in the afternoon sun and sit around Americans, not like-minded Americans, and just watch a movie in the park. And last night at about‑‑ when the movie was just about over, my wife and I got out because it was hostile.”

Later, when Beck left near the end of the movie, the crowd applauded.

“I don’t know what kind of victory you thought you won,” Beck said on radio in response, and later added, “I swear to you I think if I would have suggested, and I almost did, wow, does anybody have a rope, because there’s a tree here, you could just lynch me. And I think there would have been a couple in the crowd that would have.”
The story offered Beck an opportunity to deliver a message to conservatives:

All through the evening, I wanted to say to you today, please, please, please don’t ever treat anybody like that. If Van Jones comes and sits next to you, please don’t treat anybody like that, and then I realized I don’t have to say that to you. I was there at 8/28. I saw when people were pointing their finger in your face and calling you a racist, setting you up, egging you on, I saw how you reacted. I don’t have to tell you that.

Later in the evening, he admitted he had to call his daughter and console her because she was so distraught.

You can listen to Beck tell the story below:

Posted by Donna Sorensen/jas2maui at 10:31 AM