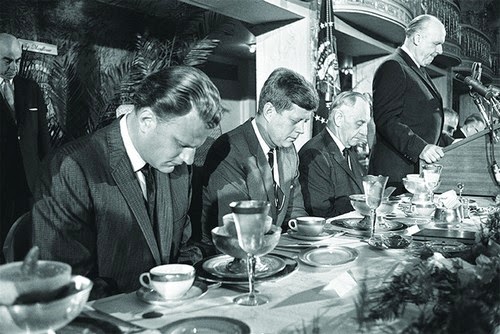 Our nation was founded by men who believed in prayer. When our government was being formed, Benjamin Franklin addressed the chairman of the Constitutional Convention meeting at Philadelphia in 1787, saying, “I have lived, sir, a long time, and the longer I live the more convincing proofs I see of this truth: that God governs in the affairs of men. And if a sparrow cannot fall to the ground without His notice, it is probable that an empire cannot rise without His aid.”

Today the world is being carried on a rushing torrent of history that is sweeping out of control. There is but one power available to redeem the course of events, and that is the power of prayer by God-fearing, Christ-believing people.

We would adapt the words of Benjamin Franklin to our day and say, “It is probable that a nation cannot keep her freedom without the aid of Almighty God.” Our first president, George Washington, led his armies to victory, but not until he had first taken time alone to invoke God’s blessings upon their cause.

Down through our history our nation’s leaders have carried their plans and hopes to God in prayer. Yet today we have come to a place where we regard prayer in our national life simply as a venerated tradition. We have no sense of coming to grips with God; we simply use prayer as a formality.

If this nation was born in a meeting based on prayer—some of its most important decisions being made only after careful prayer to God—how can we go on unless there is a renewed emphasis on prayer today? One of the reasons the United Nations has become so ineffective in handling world situations is that there is no prayer, no recognition of God. Unless the leaders of nations turn to God in prayer, their best plans will fail, just as did the plans of those who built the tower of Babel.

There are thousands of people who say prayers only in times of great stress, danger or uncertainty. I have been in airplanes when the motor died out, and people started praying. We have flown through bad thunderstorms, when all around us people who never before thought to pray were praying. It is instinctive for people to pray in a time of trouble.

Christ instructed His followers to pray, both by teaching and by example. So fervent and so direct were His prayers that one time when He had finished praying, His followers turned to Him and said, “Lord, teach us to pray” (Luke 11:1). They knew that Jesus had been in touch with God, and they wanted to have such an experience.

On another occasion He taught them to pray by way of illustration—through a parable. He told of the widow and the unjust judge who rendered her a favorable decision not because he feared her, but because of her perseverance. So Jesus said that men ought always to pray.

From one end of the Bible to the other there is the record of those whose prayers have been answered—people who turned the tide of history by prayer. Abraham prayed, and as long as he prayed, God did not destroy the city of Sodom where Abraham’s nephew, Lot, was living.

Hezekiah prayed when his city was threatened by the invading armies of the Assyrians under the leadership of Sennacherib, and the entire army of Sennacherib was destroyed and the nation was spared for another generation—because the king prayed.

Even though America is just as wicked as Sodom and Gomorrah ever were, and as deserving of the judgment of God, God would spare us if we were earnestly praying, with hearts that had been cleansed and washed by the blood of Christ.

The problems of the world will never be settled unless our national leaders go to God in prayer. If only they would discover the power and wisdom that there is in reliance upon God, we could soon see the solution to the grave problems that face the world!

Elijah prayed, and God sent fire from Heaven to consume the offering of the altar he had built in the presence of God’s enemies. Elisha prayed, and the son of the Shunammite woman was raised from the dead. Daniel prayed, and the secret of God was made known to him, for the saving of his companions and the changing of the course of history.

Jesus prayed at the door of the tomb of Lazarus, and the one who had been dead for four days came forth. The thief prayed, and Jesus assured him that this day he would be with Him in Paradise. Paul prayed, and hundreds of churches were born in Asia Minor and Europe. Peter prayed, and Dorcas was raised to life. John Knox prayed, and the results caused Queen Mary to say that she feared the prayers of John Knox more than she feared all the armies of Scotland.

John Wesley prayed, and revival came to England, sparing her the horrors of the French Revolution. Jonathan Edwards prayed, and revival came to Northampton, where more than 50,000 people joined the churches. History has been changed time after time because of prayer. I tell you, history could be altered and changed again if people went to their knees in believing prayer.

What a glorious thing it would be if millions of us would avail ourselves of the greatest privilege this side of Heaven! Jesus Christ died to make communion and communication with the Father possible. He told us of the joy in Heaven when one sinner turns from sin to God and breathes the simple prayer, “God, be merciful to me a sinner” (Luke 18:13).

In this modern age in which we live, we have learned to harness the power of the atom, but very few of us have learned how to fully develop the power of prayer. We have not yet learned that a man is more powerful on his knees than behind the most powerful weapons that can be developed. We have not learned that a nation is more powerful when it unites in earnest prayer to God than when its resources are channeled into defensive weapons. We have not discovered that the answer to our problems can be through contact with God.

Many of you do not know how to pray. Why don’t you start now by saying, “God be merciful to me, a sinner”? Let God forgive all your past sins, transform your life and make you a new person. He can do it now in answer to your prayer. That simple, direct prayer will open new horizons of spiritual victory for you and add a new dimension to your life. ©1962