The Military Co-Option Of Media And Entertainment: Video 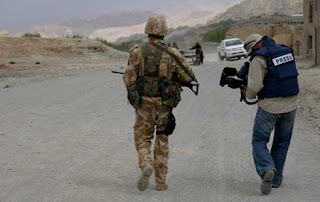 The collusion between Hollywood, the MSM, and the military industrial complex, has been ongoing since the days of William Randolph Hearst, but in the past decade it has taken on an Orwellian tone that is at once startling and absurd. Many people trust TV, mainly because most people feel that "seeing is believing". The problem is that with television, even news media, what you see is NOT reality. It is a fantasy world built upon selective editing and pre-scripted responses and events. The militarization of entertainment and journalism in the U.S. is no accident. The Pentagon makes it their business to ensure that the public is philosophically and politically conditioned to support DOD initiatives. They want us to cheer them as heroes, even if their actions are far from heroic. The militarization of any nation leads ultimately to disaster. Death can never be adopted as the theme of a society, or it too will also die.    Read More
Posted by Donna Sorensen/jas2maui at 11:34 AM