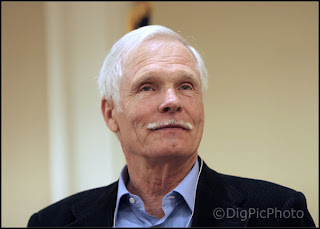 Uncle Ted has 5 children, but once the new world order is done with its economic raping of the middle class, you may be forced to get sterilized for cash

Just months after a leaked UN blueprint that revealed climate change alarmists would start pushing “overpopulation” fears in favor of the discredited mantra of global warming as a means of dismantling the middle class, billionaire globalist Ted Turner followed suit during a Cancun luncheon yesterday when he urged the world to adopt China’s brutal one-child policy, and even suggested poor people should be sterilized in return for government handouts.  Read More

New Jersey Governor Chris Christie has swiftly become a superstar in the political firmament. His stands for the taxpayers and against wasteful government spending have exhibited the type of tough decision-making people have been waiting for among our politicians; his forceful stands against the public unions and the stranglehold they have over our lives and futures have become YouTube hits. He is the real Governator, not like that pretender in California. Read More
Posted by Donna Sorensen/jas2maui at 11:04 AM

The Ulsterman Report: Glenn Beck on Wikileaks and Soros – One and the Same? | Newsflavor

Last week Fox News personality Glenn Beck appeared to connect George Soros with the Wikileaks fiasco – indicating the two entities are very much related. Is Beck correct in making such a claim?

Read More: The Ulsterman Report: Glenn Beck on Wikileaks and Soros – One and the Same? Newsflavor
Posted by Donna Sorensen/jas2maui at 10:45 AM