Could It All Be Government Phony Talk 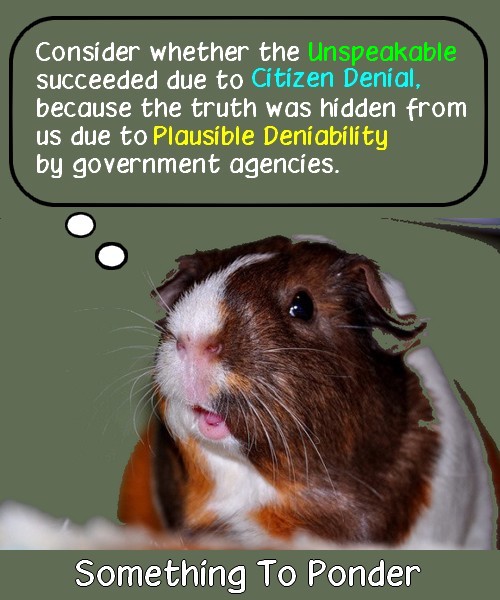 June 9, 20113
Why Was JFK Murdered?
lewrockwell.com
By Donna Coe

A few years ago while traveling to Connecticut I came across a book written by James W. Douglass, “JFK and The Unspeakable, Why He Died and What It Matters”. At the time I thought it was just another book with more of the same worn-out conclusions. I had no interest in reading it. It wasn’t until recently when I came across an interview given by Lew Rockwell, that my interest in this book reached a renewed level of curiosity. Reading JFK and The Unspeakableprompted me to write to you today.

Mr. Douglass taps into an entirely different approach. His approach is less about “who” pulled the trigger and more about “why” citizen denial overwhelmingly took hold of our nation’s mindset, in addition to the role of government’s plausible deniability, and how these elements allowed the unspeakable to occur.

Before I continue some of the terminology and circumstances Mr. Douglass discusses will need a brief explanation:

Citizen denial is a term that should be easy to understand. The difficulty is to determine whether citizen denial was the mindset in 1963 and whether it is our mindset today.

Plausible deniability is a term coined by the CIA during the Kennedy administration. It is a term used to describe the withholding of information from senior officials in order to protect them from repercussions in the event that illegal or unpopular activities by the CIA became public knowledge. Does the lack of evidence make the denial plausible, meaning that it then becomes, credible? Is plausible deniability a tactic used by the CIA today?

The explanation of the unspeakable is perhaps the most interesting, yet it might also be the most difficult to grasp. It should be noted that Mr. Douglass developed a deep admiration for the writings of Father Thomas Merton. Father Merton was born in France in 1915; he was a Trappist Monk, a poet and spiritual writer, social activist, and student of comparative religion. It was Father Merton who coined the phrase “The Unspeakable” that Mr. Douglass uses in the title of his book. “The Unspeakable” as defined by Father Merton and as it is understood by Mr. Douglass is, “an evil whose depth and deceit seem to go beyond the capacity of words to describe.”

Mr. Douglass wants us to consider whether the unspeakable succeeded due to citizen denial, because the truth was hidden from us due to plausible deniability by government agencies. He presents a compelling argument that President Kennedy was assassinated by unspeakable forces, and he provides highly detailed and intricately linked evidence based on his own research and a vast array of some of the best scholarship. 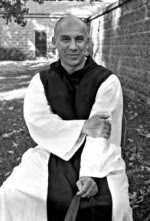 Thomas Merton (1915-1968) is arguably the most influential American Catholic author of the twentieth century. His autobiography, The Seven Storey Mountain, has sold over one million copies and has been translated into over fifteen languages. He wrote over sixty other books and hundreds of poems and articles on topics ranging from monastic spirituality to civil rights, nonviolence, and the nuclear arms race. 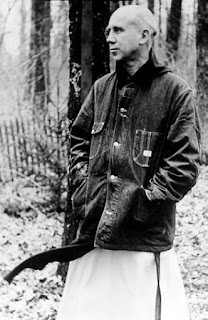 "Whatever I may have written, I think it all can be reduced in the end to this one root truth: that God calls human persons to union with Himself and with one another in Christ, in the Church which is His Mystical Body. It is also a witness to the fact that there is and must be, in the church, a contemplative life which has no other function than to realize these mysterious things, and return to God all the thanks and praise that human hearts can give Him. It is certainly true that I have written about more than just the contemplative life. I have articulately resisted attempts to have myself classified as an "inspirational writer." But if I have written about interracial justice, or thermonuclear weapons, it is because these issues are terribly relevant to one great truth: that man is called to live as a child of God. Man must respond to this call to live in peace with all his brothers and sisters in the One Christ."
Posted by Donna Sorensen/jas2maui at 11:24 AM

The Scandal Dump is a Smokescreen 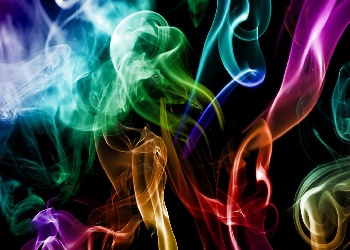 For several months, the Benghazi scandal lay dormant, apparently forgiven and forgotten. Then, inexplicably, it reared its ugly head when Congressmen Ron Johnson and Jason Chaffetz smelled Obama's blood in the water.

After feigning affliction with the flu, and then ostensibly tumbling down a carpeted stairwell resulting in an unconfirmed concussion, then-Secretary of State Clinton was finally forced to testify before Congress. Clinton's desperate attempt to put the Benghazi scandal to rest with her now-infamous impassioned declaration -- "What difference, at this point, does it make?" -- only fanned the flames of American outrage at the needless deaths of Ambassador Chris Stevens, his aide Sean Smith, and two valiant Navy SEALS, Tyrone Woods and Glen Dougherty.

At this point, the focus of the investigation was confined to the failure of the Obama regime to adequately protect the American consulate in a hostile country and its subsequent attempt to cover up that ignominy. Nobody, except us conspiracy theorists, was asking about the real reason for the coordinated terrorist attack. Hint: it was not a video mocking Islam. Here are the questions that should have been asked, but were not:

Why was American security systematically withdrawn and transferred to incompetent Libyan operatives several month before the attack?

What were the missions of Ambassador Chris Stevens, Tyrone Woods, and Glen Dougherty?

Why was the order to "stand down" given to ready and able military rescue forces?

The Obama regime frantically feared that these questions were forthcoming. Desperate to change the subject, the nefarious regime serially released a spate of "gates" intended to inundate the news media outlets in order to provide a smokescreen obscuring the lethal Benghazi questions. Read More
Posted by Donna Sorensen/jas2maui at 9:44 AM