"Congress and the White House are continuing to fiddle while the country burns.  Government deficit spending has increased six-fold since 2008."

Conservatives warned about it, economists predicted it, and now it's here. Inflation has arrived and it's taking off like a rocket. IBD reports that wholesale prices, often a precursor to consumer prices, rose at an yearly rate of 8% in February. The story warns: "Food prices today are the highest on record, rising at double-digit rates (see chart). Meanwhile, gasoline tests the $4-a-gallon level, the dollar is weakening, and gold is near its all-time high."

This ominous surge is attributable to very high energy and food prices driven mostly by our government's reckless spending that's accelerating rather than abating. Combined with Obama's suicidal energy policies, continuing political instability across the Middle East, the government's stifling regulatory hold on our economy, the EPA's assault on manufacturers and energy producers, and the recent catastrophe and devastation in Japan, a dangerous perfect storm of inflationary and destabilizing factors are emerging which will spell disaster for our economy and negatively affect all American consumers' purchasing power and wealth.  Read More
Posted by Donna Sorensen/jas2maui at 9:46 PM

Posted by Donna Sorensen/jas2maui at 7:09 PM 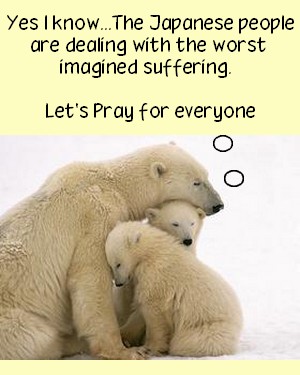 Posted by Donna Sorensen/jas2maui at 12:06 PM

Fukushima Dai-ichi nuclear facility is really starting to cause panic 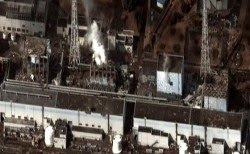 Global financial markets are in turmoil as the situation in Japan continues to deteriorate. Stock markets are plunging all over the world as investors flock to investments that are considered to be safer. The 9.0 earthquake and the unprecedented tsunami in Japan would have been more than enough to spook investors and unleash chaos on world financial markets, but now the unfolding nightmare at the Fukushima Dai-ichi nuclear facility is really starting to cause panic. Right now there is a mass exodus out of the city of Tokyo. But not everyone can leave the city. There are over 30 million people living in and around Tokyo. So where in the world could you possibly put 30 million refugees? Sadly, the truth is that millions of Japanese are going to stay in Tokyo no matter how high the radiation gets. Let us hope that Japanese authorities can get the situation at the Fukushima Dai-ichi nuclear facility under control, but the fact that they have resorted to dropping water from helicopters and shooting water cannons at these nuclear reactors is not comforting.
Read More
Posted by Donna Sorensen/jas2maui at 11:48 AM

A Letter From The American Taxpayer

An open letter to John Boehner and the GOP 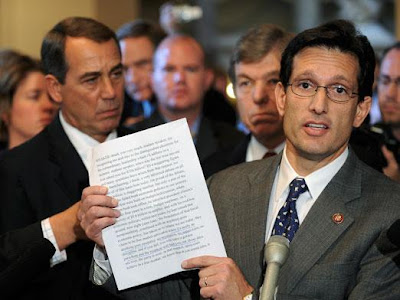 Pull the plug on ObamaCare, on taxpayer funding of abortion, on Dodd-Frank, on NPR, on PBS, on the National Endowment of the Arts (NEA, on the EPA! Drill, baby drill, and protect our sovereignty!

There appears to be two sets of rules within the Federal government, one for the Progressives, in which the ends justify the means, and one for those of character, in which protocol is used as a diplomatic guideline, not wielded as a weapon. In the political exchange within the Federal government, the Progressives have fired lethal legislative ammunition while the GOP is returning fire with beanbag bills of Continuing Resolutions.

Barack Obama and the Democrats revealed their disdain for bi-partisanship when you (and, by proxy, the taxpayers) were frozen out of the ‘legislative’ process as the sausage of ObamaCare was stuffed with legislative and fiscal payoffs behind closed doors. That was not representative government! When President Obama proclaimed ‘I won,’ he revealed his sophomoric demeanor and signaled his intent of imposing ‘one-party rule,’ only slightly shy of a full-fledged dictatorship.  Read More
Posted by Donna Sorensen/jas2maui at 10:51 AM