The Honor of a Great People

"We reclaim our honor by turning away from those who believe the great mass of us are beneath their contempt, and compassion is best expressed through domination. They have no power we didn’t give them, which means they have no power we cannot take away. Let us begin."
Posted by Donna Sorensen/jas2maui at 7:58 PM

Be The Best You Can Be Through Prayer

Posted by Donna Sorensen/jas2maui at 1:35 PM

Posted by Donna Sorensen/jas2maui at 11:19 AM

Moral authority — that’s what the rally was really about. 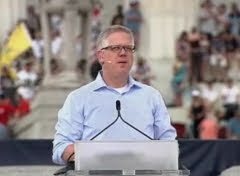 "Moral authority — that’s what the rally was really about."

Mr. Beck made a surprise visit on Friday to a convention held by FreedomWorks, a Tea Party umbrella group, for Tea Party supporters. He received a thunderous welcome from a crowd of about 1,600 in Constitution Hall.
He told the crowd that he had begun planning his march on Washington a year ago, thinking “it was supposed to be political.”
“And then I kind of feel like God dropped a giant sandbag on my head,” he said.
“My role, as I see it, is to wake America up to the backsliding of principles and values and most of all of God,” he said. “We are a country of God. As I look at the problems in our country, quite honestly, I think the hot breath of destruction is breathing on our necks and to fix it politically is a figure that I don’t see anywhere.”
***
In a way, the rally today mirrored rallies held for then-candidate Barack Obama in 2007 and leading up to the election of 2008. Both this rally and many of Obama’s featured mesmerizing speakers, who chose to inspire audiences by rhetorically empowering them to take matters into their own hands.
While Beck’s rally emphasized belief in God, Obama’s generally emphasized himself as a savior of the American people. This, I believe, was the contrast the talk radio and television personality was trying to achieve. Beck’s rally, and the speakers who addressed the crowd, were continually thanking God and Beck for bringing such an inspiring crowd together…
Only toward the end of the program did Beck refer to Democrats, Republicans, and independents. But it still wasn’t political. It was a unity call, imploring everyone to come together and unite to “restore honor.” It was a post-partisan moment. Similar, in a way, to Obama’s 2004 DNC speech, when the then-state senator from Illinois suggested that we should not remain isolated in a “red America” or a “blue America,” but should come together as the United States of America.
***
We need to think about the success of Beck’s rally Saturday and ask what it says about the lack of moral authority in this country today. We also need to wonder what it says about us as a culture that so many Americans on a Saturday in August and more than two million a day via Fox News come to Beck and apparently hear something in his hodge-podge of elementary-school history and mishmash of moral platitudes and bromides that they find meaningful.
Moral authority — that’s what the rally was really about. That’s what the bagpipes playing “Amazing Grace” at the end of the rally were all about. That’s what all the talk of standing on “hallowed ground” was all about. That’s what the repeated use of words like “honor,” “integrity” and “trust” were all about…
That’s what what was so powerful about November 2008 in Grant Park when Barack Obama took the stage on election night: Millions of Americans thought they were watching someone who brought moral authority to the White House. I know I did.
Sadly, millions now feel Obama has since lost it with too many morning-after flip-flops on moral issues, entertainment TV show appearances, and days on the golf course as the economy struggles.
***
“Restoration” is a theme he has a gift for: a gift not only of analytical insight but of personal experience with balancing justice and mercy, and distinguishing between self-deception and realistic hope.
And he’s right about this, too: America can’t be set on a better course solely with changes in federal policy. Law and government don’t – can’t – make the people good. They don’t make us eligible for liberty. Our law and government are only as good as we are. It’s the people who have to change. And spiritual revival never looks like something organized by State Department protocol; when people are changing from the inside, there are rallies, hortatory preaching, gabfests, sorrow, joy.
I urge my fellow conservatives not to despise this phenomenon or be disparaging about it. All our futures depend on the character of the people around us. Fear, defensiveness, and moral weakness in the people are the best friends of the tyrant. None of us can resist the siren-call of statist collectivization single-handedly. It is not embarrassing or over-the-top for people to gather in public to affirm that there’s such a thing as good character, and that we can’t do without it. It is meaningful and life-changing to many. It is necessary.
Posted by Donna Sorensen/jas2maui at 9:52 AM