Posted by Donna Sorensen/jas2maui at 7:50 PM

Why the Crucifixion Scene Haunted 'The Bible's Diogo Morgado

I was having a conversation with a retired Army Ranger and he brought up a great point. The Crucifixion of Jesus is the single most important event in human history and the foundation on which the entire Christianity movement was based. Had Jesus not died and defeated death three days later there would be no Christianity because the followers of Jesus would have never given their lives for a “hoax”, especially dying the gruesome & painful ways they did die. He pointed out that out of all of the evidence that proves the Bible, God was clever enough to leave behind one artifact that has so many layers to it that it is astonishing. The Shroud of Turin. Now that it has been proven authentic and actually captured the intense light that was produced when Jesus was resurrected it accomplishes some powerful things. For example:

A) Proves there is life after death
b) Proves that Jesus is who he said he was
c) Proves how much he suffered for our sins
d) Left scientific evidence that took mankind 2000 years to catch up to
e) One cloth disproves all other religions in one swoop. Especially Islam which bases its scriptures on the fact that “Jesus (Isa in the Koran) lied about the cross.” So in one artifact, that entire religion is proven false.
f) Confirms God’s message that no one will be with excuse on the day of judgement.
Posted by Donna Sorensen/jas2maui at 7:34 PM

Don't Be A Pawn

Posted by Donna Sorensen/jas2maui at 10:44 AM

How The Boston Bombing Is Already Being Exploited To Introduce Tyranny 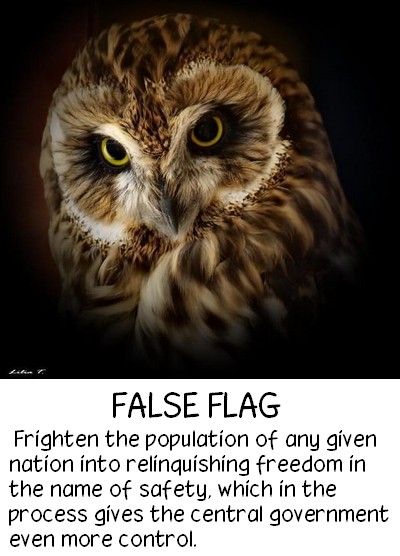 I have no personal experience in the business of false flag terrorism, but I imagine that engineering a successfully staged terror attack to be blamed on innocent or semi-innocent parties with the goal of psychologically manipulating a population requires that one also be an accomplished storyteller. It demands an avid imagination and an organized sense of foresight. And, most of all, it requires a consistency of narrative. Without consistency, the audience’s ability to suspend its disbelief is damaged, and they become disconnected from the fantasy being portrayed.

If I were the “writer” behind the “story” of the Boston Marathon Bombing, I would consider my efforts an abject failure.

The narrative of the event has changed multiple times in only a few days, following a hailstorm of conflicting observations from the government and the establishment-run media. The “villain” of the original plotline was clearly meant to be “rightwing extremism” as numerous mainstream talking heads, led by federal agency inferences, began repeating the “homegrown right wing terrorist” meme everywhere. This meme was partly abandoned after the alternative media and the Liberty Movement began its own investigation, revealing a large federal presence on the scene, including military Civil Support Teams often tied to the DHS and Northcom, as well as the witnesses who observed what on-scene officials called “training exercises” during the marathon. I have no doubt that these citizen investigations forced the establishment to change the direction of their crime tale, and use Plan B patsies instead. This, however, complicated the momentum of the fiction, and created even more questions. Read More
Posted by Donna Sorensen/jas2maui at 10:04 AM

Krauthammer: Obama’s Refusal To Use Terms “Jihadist” And “Islamist” Is “Comical And Embarrassing”…

Posted by Donna Sorensen/jas2maui at 9:57 AM

‘Armed and Dangerous’: Beck’s Latest Revelations on Saudi National Once a ‘Person of Interest’ in Boston Bombings

Posted by Donna Sorensen/jas2maui at 9:50 AM