Yes, You Can Survive The Coming Economic Nightmare

Yes, You Can Survive The Coming Economic Nightmare – One Family In California Grows 6,000 Pounds Of Produce On Just 1/10th Of An Acre 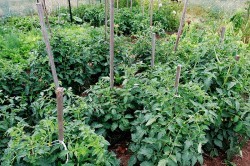 If you work hard and get prepared, you can survive the economic nightmare that is coming.  All over the United States and around the world there are millions of people that are learning how to become more self-sufficient.  For example, there is one family that is actually producing 6000 pounds of produce on just 1/10th of an acre right in the middle of Pasadena, California.  In fact, they grow so much food that they are able to sell much of it to restaurants in the area.  Video of this incredible "urban homestead" is posted below.  The key is to start with what you have.  The family in the video below would like to have a large acreage, but for now they have turned what they do have into an absolute miracle.  Yes, a horrific economic nightmare is coming to this country, but you don't have to be afraid.  One of the main reasons why so many of us are trying to warn people about what is coming is so that they will wake up and take massive action to become self-sufficient like the people in the video below have.  Read More

Posted by Donna Sorensen/jas2maui at 8:00 PM

Obama at the Abyss 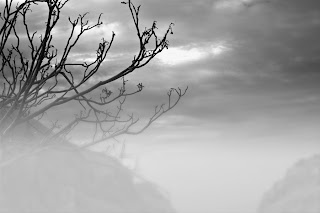 It's crunch time in Washington, D.C. President Obama must know that a dozen Republicans are saving those boastful videotapes of Mr. O pushing President Mubarak out of power, followed by an endless series of breakdowns throughout the Arabic world.

Just think about that as a 30 second commercial next election year:

Map of the Middle East with fires exploding in a series from Tunisia to Bahrain, to the sound of breaking glassware. Over and over again.

Those chandeliers will still be falling from the ceilings in the next election campaign, because the instability in the Arab world is not going to be settled quickly. Obama will be seen as another Jimmy Carter, and like Carter, his first challenge will come from inside the Democratic Party.

It was Ted Kennedy who challenged Carter in the Democratic primaries after the Iranian fiasco. Kennedy weakened Carter, and Reagan got elected as a result. Democrats who lived through that disaster for the left haven't forgotten it, and Obama is now looking into the same abyss. His biggest challenge is likely to come from Hillary and Bill, who are aching for revenge.

But Hillary is also implicated in the fiasco in the Middle East, where Obama deliberately told Mubarak to leave, after raising expectations throughout the Muslim world that he couldn't possibly satisfy. The voters can also be reminded of HillaryCare, as ObamaCare runs into the longest economic recession in history.
Read More
Posted by Donna Sorensen/jas2maui at 12:55 PM

Wisconsin: Creating even more hate between the left and the right

Divide And Conquer: The Union Protests In Wisconsin And Ohio Are Increasing The Hate Between The Left And The Right 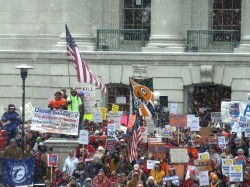 What is the perfect way to get the eyes of the American people off of the real economic problems that this country is facing?  Get them fighting with each other of course.  And what is one issue that is sure to get the left and the right screaming at each other like cats and dogs?  Unions.  The battle over collective bargaining rights in Wisconsin has been making headlines around the world for weeks and there are no signs that it is going to end any time soon.  In fact, Mordecai Lee, a political scientist at the University of Wisconsin-Milwaukee, says that it is "a battle to the death".  The Democrats that have gone AWOL appear to be absolutely determined to stay away.  The protesters seem equally determined to keep on fighting.  Wisconsin Governor Scott Walker does not look like he plans to back down either.  Meanwhile, both sides are calling each other the most horrible names.  "Hitler", "Stalin", "Nazi" and "fascist" are just a few of the terms that are being thrown around by both sides.  What has been going on in Wisconsin has captured the imagination of the entire nation and it is creating even more hate between the left and the right in this country.  Unfortunately, as the economic pie in this nation continues to shrink, economic battles such as the one in Wisconsin are going to become quite common.   Read More
Posted by Donna Sorensen/jas2maui at 9:57 AM