US to begin peace talks with Taliban

US to join direct peace talks in Qatar with Taliban over Afghanistan's future
www.guardian.co.uk 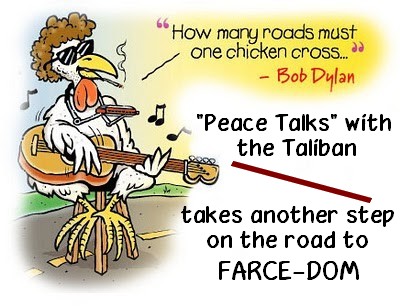 Posted by Donna Sorensen/jas2maui at 11:35 AM

No Rose Can Mask the Stench of Obama's Tyranny

Like a skunk that has grown inured to its own smell, Barack Obama is oblivious to the dense musk of tyrannical arrogance that he customarily emits. As someone who is statist to down to his chromosomes, Mr. Obama considers government's power to be illimitable, and individual freedom to be a revocable gift conferred by those who presume to rule the rest of us. This was made abundantly – and redundantly – clear in a recent interview Obama gave to the repellently sycophantic PBS host Charlie Rose regarding the totalitarian NSA surveillance program.

Speaking about what he called “tradeoffs” between freedom and security, Obama said: “I don’t think anybody says we’re no longer free because we have checkpoints at airports.” Read More
Posted by Donna Sorensen/jas2maui at 10:43 AM