The Socialization Of America Is Economically Impossible 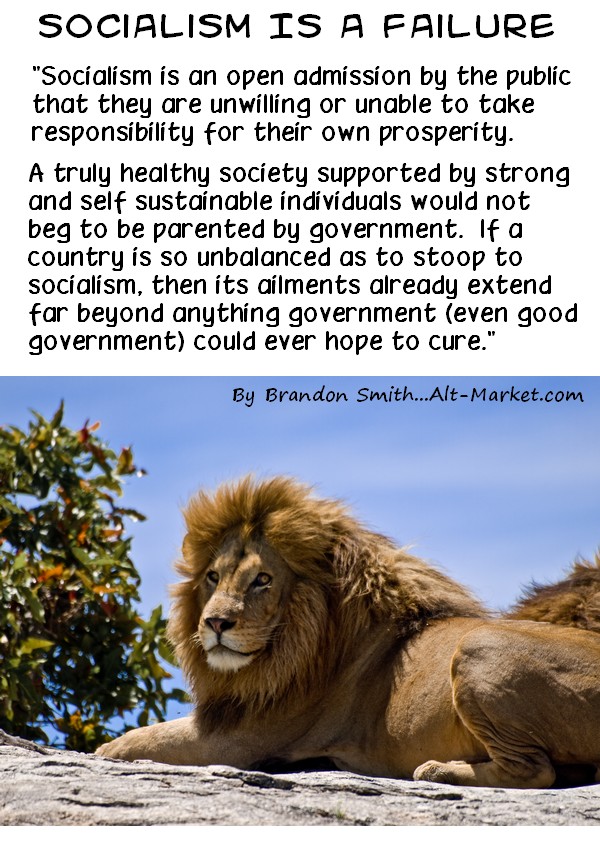 "A country that feels the need to socialize has, in my view, already failed culturally. It is an open admission by the public that they are unwilling or unable to take responsibility for their own prosperity."

I understand the dream of the common socialist. I was, after all, once a Democrat. I understand the disparity created in our society by corporatism (not capitalism, though some foolish socialists see them as exactly the same). I understand the drive and the desire to help other human beings, especially those in dire need, and the tendency to see government as the ultimate solution to all our problems. That said, let’s be honest; government is in the end just a tool used by one group or another to implement a particular methodology or set of principles. Unfortunately, what most socialists today don’t seem to understand is that no matter what strategies they devise, they will NEVER have control. And, those they wish to help will be led to suffer, because the establishment does not care about them, or you. The establishment does not think of what it can give, it thinks about what it can take. Socialism, in the minds of the elites, is a con-game which allows them to quarry the favor of the serfs, and nothing more.

There are other powers at work in this world; powers that have the ability to play both sides of the political spectrum. The money elite have been wielding the false left/right paradigm for centuries, and to great effect. Whether socialism or corporatism prevails, they are the final victors, and the game continues onward…

Knowing this fact, I find that my reactions to the entire Obamacare debate rather muddled. Really, I see the whole event as a kind of circus, a mirage, a distraction. Perhaps it is because I am first and foremost an economic analyst, and when looking at Obamacare and socialization in general, I see no tangibility. I see no threat beyond what we as Americans already face. Let me explain… Read More
Posted by Donna Sorensen/jas2maui at 11:48 AM