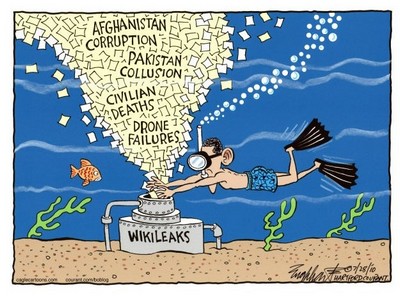 "The cables show something many have always known -- that most so-called leaders and politicians are liars, schemers, crooks, egomaniacs, and incompetents."

"The regime will try to deflect attention from itself by directing the anger of the American people at a little Australian programmer. They will claim that Julian Assange represents a mortal peril and that he must stopped and perhaps even killed. Do not fall for this. Such claims are absurd and preposterous."

"Ask yourself this: Who is the greater threat to America? Is it an Australian programmer or Barack Obama? Assange is merely a website operator. He has no backing or powers to inflict harm on this country. Obama, on the other hand, has been using the powers of his office to systematically destroy the American economy, the dollar, our standard of living, and our standing in the world. He has been stoking racial tensions. He has been taking private property of American citizens and giving it to his friends. He and his people have been destroying the values and fabric of American society faster than you can say "bam."