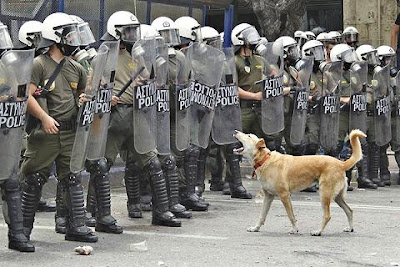 Who would have thought it possible? Greece, a tiny country on the Mediterranean which is, in the grand scheme of things, economically insignificant, has become the centerpiece of the global financial media and the “make or break” sovereign debt battle for the entire European Union. Let’s face it; Greece dominates the psychology of the markets. Even after a “partial” default this year, equities still hang upon every new EU meeting, every new IMF press release, every meaningless conference between Merkel and Sarkozy, causes violent swings in the Dow, not to mention every other stock index across the world. Greece collapsed months ago. The discussion is over. Yet, global investors still wait anxiously for a sign that all is well in the land of the Parthenon and the Gyro.

The reality of the situation in Greece is clear for anyone who is willing to look at the facts as they stand. Greek debt is a dead end investment. The percentage lost on bond payouts grows by the quarter due to partial bankruptcy. Unemployment hovers around 16% (officially). Despite trends which are often associated with a deflationary collapse, the Greek cost of living remains quite high, meaning prices are not falling comparatively with wages and employment as they should. Austerity is in full force, pensions are being cut or confiscated outright, and riots are a monthly if not weekly occurrence. Corruption in the Greek government and influence by international banks such as Goldman Sachs led to extreme exposure of the country’s assets to the derivatives crisis as well as a massively expanded debt to GDP ratio, yet, Papoulias and many other Greek officials have decided to place full responsibility for the crisis directly in the laps of the Greek people, claiming that it is they who must sacrifice, and they who are to blame if the system crumbles beneath their feet. Violence, even beyond the furious protests prevalent today, is inevitable in the face of such hypocrisy. Read More
Posted by Donna Sorensen/jas2maui at 9:22 AM