Return of the Ukulele

Return of the Ukulele 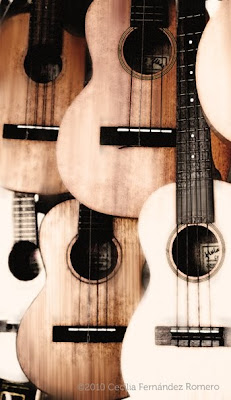 The plucky little instrument with the Hawaiian name has been making an enormous comeback. That’s in no small part thanks to performers like Jake Shimabukuro and the late Israel Kamakawiwo‘ole, whose demonstrations of the ‘ukulele’s astounding versatility have epiphanied audiences’ socks off.

And it’s not just an island phenomenon, notes Toronto filmmaker Tony Coleman in his 2010 documentary The Mighty Uke: The Amazing Comeback of a Musical Underdog, which features Shimabukuro. ‘Ukulele clubs and classes can be found all over the globe.

Nor is this the first time the diminutive instrument has captured the public’s imagination. Over the decades, a surprising array of celebrities has found the humble ‘uke appealing—from Elvis Presley to Arthur Godfrey, from The Cars’ Greg Hawkes to the Dresden Dolls’ Amanda Palmer. All three of the Beatles who played guitar also performed on ‘ukulele. Of course, Hawai‘i’s King David Kalakaua wasn’t only a fan; he knew the correct pronunciation (at least here in the Islands is “oo-koo-lay-lay,” sans the initial “y.”

Kazoos aside, few instruments are as easily mastered as the ‘uke—at least at the basic level. When the accomplished and irreverent ‘Ukulele Orchestra of Great Britain played Albert Hall, performing with ‘ukulele in hand and tongue in cheek, so did many in the audience, who had brought their own ‘ukes along.

“Anyone can learn to play a couple of chords,” says a fan in The Mighty ‘Uke. “It’s a people’s instrument.”

For a group of Maui kama‘aina, it’s also a way to preserve an island heritage. Moana Anderson and Honeybun Haynes are among the fourteen members of Honeybun and the Coconuts, an ‘ukulele band that performs at the Pukalani Country Club on Tuesday nights. Their musical coach is Walter Kawae‘aea, protégé of the late, legendary Kahauanu Lake. “What we do has a lot to do with ‘Uncle K,’” says Anderson.
Posted by Donna Sorensen/jas2maui at 10:32 PM

Golden Goose is in Peril

We have become a society of narcissistic, self-centered, drug-crazed and apathetic creatures. The time has come when democracy and the forefather’s framework for our society has been trashed...Facebook post by William Heimermann
Posted by Donna Sorensen/jas2maui at 1:02 PM