Obama Destined to Be a Footnote in Presidential History

Barack Obama has set a course that will leave his legacy as no more than a footnote in American presidential history. For all of the bluster and glory, for all of the pomp and circumstance, and yes, for all of the anticipated hope and the promised change, the whirlwind of hype and expectation surrounding the president a mere two years earlier has virtually dissolved.

On all of these accounts, President Obama has been a striking failure.  Read More
Posted by Donna Sorensen/jas2maui at 9:23 AM

Obama Has Lost the World 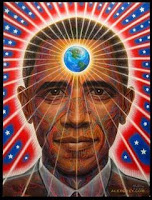 After the 2010 elections, it's not exactly news that Obama has lost America. But in a less public referendum, he also lost the world. Obama's cocktail party tour of the world's capitals may look impressive on a map, but is irrelevant on a policy level. In less than two years, the White House has gone from being the center of world leadership to being irrelevant, from protecting world freedom to serving as a global party planning committee.

Even the Bush Administration's harshest critics could never have credibly claimed that George W. Bush was irrelevant. He might have been hated, pilloried and shouted about-- but he couldn't be ignored. However Obama can be safely ignored.  Read More
Posted by Donna Sorensen/jas2maui at 8:51 AM