Day Of Rage: Saudi Arabia In Veiled Threat To US

"The global elite are trying desperately to engineer a geopolitical climate that will sustain high oil prices. Chaos and instability in the region is the perfect cocktail to achieve this agenda."

As the world braces itself for Saudi Arabia’s “day of rage” on Friday, which many fear could be the spark that sends oil prices soaring to beyond the $200 a barrel mark, Saudi Foreign Minister Prince Saud Al-Faisal issued a veiled threat to the United States, warning that the Kingdom was prepared to “cut foreign fingers” in the event of any outside interference.

The “day of rage” was been organized by Saudi youths using a Facebook page that has attracted over 17,000 members. A message posted on the page also called for a “Saudi Revolution” demanding democratic and political reform on March 20.

48 hours ahead of the first protest, Saudi Arabian Foreign Minister Prince Saud al-Faisal issued a stern message to outsiders who saw the demonstrations as an opportunity to advance geopolitical plans against the oil-rich country.

Claiming the protests violated, “The Koran and the way of the Prophet,” Faisal vowed that the Kingdom would “cut off” any accusing finger of foreign nations who condemned the government’s response to the Shiite protests, which is expected to be brutal.  Read More
Posted by Donna Sorensen/jas2maui at 1:30 PM

Soros: Communist Chinese Model Of Order May Become “The Envy Of The World”

Billionaire investor George Soros has once again cited China’s dictatorship as the model for the rest of the world in a speech at an elite gathering in Europe.

Soros told the exclusive Travellers Club, that “China’s model of state capitalism, in which the interests of the individual are subordinated to those of the government, poses a danger if its example becomes“the envy of the world.”

“Perfect order and global governance are not realistic expectations.” Soros was reported to have said at the elite gentleman’s meeting in Paris.

“However, it is a sad fact that Western democracies provide less successful leadership than China.” he continued.

Soros is clearly imagining a world in which freedom has all but vanished, given that he believes anyone in Europe or the US could ever envy life in China.

Soros has repeatedly stated that he sees China as the model for a new financial world order, replacing the U.S., slowing economic growth and reducing living standards.

Soros has characterized the United States as a drag on the global economy because of the declining dollar, adding that a new global currency is required in the form of IMF special drawing rights – paper bonds printed by the global regulatory body.

He has also described gold as “the ultimate bubble”, advising against investing in it, while privately doubling his own gold holdings.  Read More
Posted by Donna Sorensen/jas2maui at 1:22 PM

How To End the Federal Reserve System

"How could we get rid of the Federal Reserve? What will replace it?" The answer: either the free market or Congress." 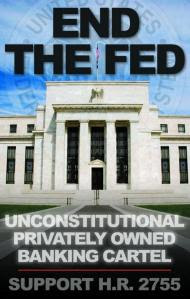 Things are not always as complicated as they seem. With respect to the Federal Reserve System, it is a deliberate mystery. It was deliberately designed in 1910 to deceive the public, who were opposed the idea of a central bank. The conspirators who met on Jekyll Island in November 1910 knew this. They did good work from their point of view. They concealed the beast.

The general public today knows little about the FED. Prior to Ron Paul’s Presidential run in 2007-8, far fewer people understood it.

I have been asked: “How could we get rid of the Federal Reserve? What will replace it?” The answer: either the free market or Congress.

People who think of themselves as free market people often are not. The tax-funded public schools and the state-regulated and accredited university faculties have taught that the modern system of intrusive civil government is necessary for an orderly society. People cannot imagine a market-based society.

There is an old saying, “You can’t beat something with nothing.” But the free market social order is not nothing. It is expanding around the world, which is why the world is getting richer.

At the Federal level, a free market social order in banking existed prior to 1914. That was back when the dollar was worth over 20 times what it is worth today. On this point, see the inflation calculator of the Bureau of Labor Statistics.

We can go back to that system. We will go back to it. The question is: When? The other question is: At what price?  Read More
Posted by Donna Sorensen/jas2maui at 9:54 AM

His awesomeness is awe-inspiring.

Posted by Donna Sorensen/jas2maui at 9:27 AM