Government Rail to the Edge of the Abyss

"We are approaching an abyss. But the frenzied looting by Obama and friends will not stop until either they are removed from power or our once great nation collapses into insolvency." 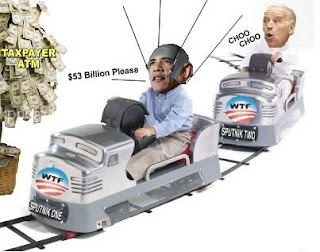 From now until the day our entire economy collapses under the weight of government debt is a wonderful time to be a corrupt bureaucrat or crony capitalist, as made obvious by Comrade Obama's recently announced "high speed" rail boondoggle:

At Philadelphia's 30th Street Station on Tuesday, lifelong government rail promoter Vice President Joe Biden unveiled a $53 billion high-speed train initiative and half-joked: "I'm like the ombudsman for Amtrak." As with most gaffetastic Biden-isms, the remark should prompt more heartburn than hilarity. Just who exactly is looking out for taxpayers when it comes to federal rail spending?  Read More
Posted by Donna Sorensen/jas2maui at 7:50 PM

Good grief!… Will the United States have any allies left when the Obama regime leaves office?
It doesn’t look like it. 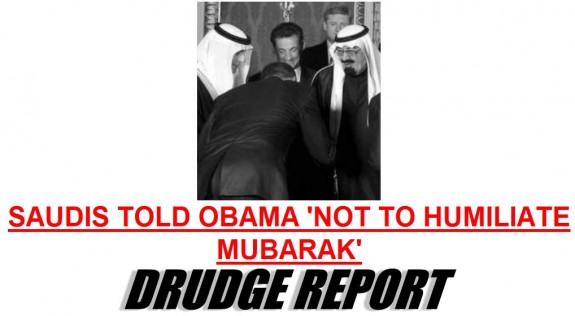 The Saudi King threatened to prop up Egyptian President Hosni Mubarak if the Obama White House tried to force a swift regime change in Egypt.
The Times reported:

Saudi Arabia has threatened to prop up President Mubarak if the White House tries to force a swift change of regime in Egypt. In a testy personal telephone call on January 29, King Abdullah told President Obama not to humiliate Mr Mubarak and warned that he would step in to bankroll Egypt if the US withdrew its aid programme, worth $1.5 billion annually. America’s closest ally in the Gulf made clear that the Egyptian President must be allowed to stay on to oversee the transition towards peaceful democracy and then leave with dignity. “Mubarak and King Abdullah are not just allies, they are close friends, and the King is not about to see his friend cast aside and humiliated,” a senior source in the Saudi capital told The Times.

Nice work, Barack.
You’ve just pi$$ed off every American ally in the Middle East… But, at least Iran is happy.
Posted by Donna Sorensen/jas2maui at 7:42 PM