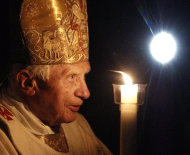 Still, Benedict worried in his homily: "The darkness that poses a real threat to mankind, after all, is the fact that he can see and investigate tangible material things, but cannot see where the world is going or whence it comes, where our own life is going, what is good and what is evil."

"The darkness enshrouding God and obscuring values is the real threat to our existence and to the world in general," the pope said. Read More
Posted by Donna Sorensen/jas2maui at 7:35 PM

How Sturdy Is the Obama Narrative that 'Keeps Us Silent'?

Count Roger Kimball in among those who recognize the totalitarian atmosphere somehow created to protect President Obama. The entire range of questions related to Mr. Obama's possible ineligibility for the presidency has been rendered taboo.

Recently, Kimball wrote a piece affirming the brave observations of Diana West found in her piece, "Silence of the Lapdogs." In her essay, West explains why the incriminating findings of Sheriff Joe Arpaio's investigative team are not common knowledge.

Regarding the nativity story of Barack Obama, Kimball notes that "[i]t's not just that you are not allowed to express certain opinions about the subject. You are not even allowed to publicly entertain any questions about it."

The accepted Obama narrative has been a secure fortress for Obama. The president stays inside its walls unruffled, with lifted chin. The narrative "keeps us silent" even though in reality it's a house of cards

The old word "scofflaw" denotes not just a lawbreaker, but somebody who mocks the law.

I've seen many debates about the war powers of the U.S. Congress, but I've never seen an American president openly laugh at the idea of seeking congressional approval for a major U.S. military assault on another country.
Obama did it with Libya, Yemen, Somalia, and Kenya and tried it in Syria. But not in Iran.
Gaddafi is dead, Libya is a disaster, and no one has gotten any answers. Other than that contemptuous laugh. The media don't even dare to ask questions. They are afraid of retaliation.
I haven't seen an American president openly pressure the U.S. Supreme Court to protect his party's takeover of one-seventh of the American economy.
As Charles Krauthammer pointed out regarding the assertion of Federal jurisdiction made by Obama:

If [being born] ... means entering the market, Congress is omnipotent, authorized by the commerce clause to regulate "every human activity from cradle to grave." Read More
Posted by Donna Sorensen/jas2maui at 5:07 PM

America: A Government Out Of Control

The following content is likely familiar to those who are regular readers here at Alt-Market, but I thought the amount of effort and care that went into making this video series warranted special attention. New America Now takes my recent essay "What Kind Of Power Should Government Have Over Your Life" and gives it the energy of visual media. I am truly honored that they exerted the considerable time and perspiration needed to recreate one of my articles this way, and I hope that Alt-Market readers will visit their YouTube channel and website in return. In the meantime, take a gander at this production...

Posted by Donna Sorensen/jas2maui at 4:45 PM