Americans no longer trust their country

Trust Is a Two-Way Street: Beck Gives What Could Be The Most Powerful Oval Office Speech Yet

Posted by Donna Sorensen/jas2maui at 8:05 PM

The Man Is a Liar...Barack Obama 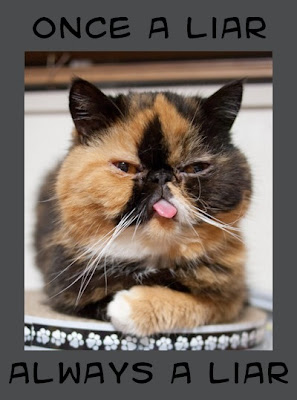 The man is a liar. Every time Barack Obama gives a speech or makes a statement and then turns to walk away from the podium, I expect to see another set of lips on the back of his head, flapping out the opposite of whatever the front of him just finished blabbing.

It's not a tax, it is a tax, it's not a tax. Not only does it make you dizzy, but you have to wonder if Obama thinks America comprises complete morons and nothing else. With respect to anyone who still believes a word out of his mouth, I would agree with him: those rarified few are certainly morons, or at the very least delusional and perhaps in need of intensive medication therapy -- or as the famous black racist Charles Barron would say, at least a good "slap" -- if only for our collective sanity. Oh, and I would remove Barron's requirement that the person being slapped be white. After all, it's possible for anyone to be an Obama sycophant. Delusion is colorblind.

With Chief Justice Roberts' contortions at creating constitutionality in support of ObamaCare, you would think that in victory our president would at least accept the terms of surrender. But even that is a bridge too far for the Punahou dissembler.

He rejoices in the affirmation of ObamaCare as constitutional on the basis of the power of congress to tax, and then turns around and says the ObamaCare mandate is still not a tax.

But then, the man is a serious, serial dissimulator -- examples of the storyteller's stories abound.

"If you like your doctor or health care plan, you can keep it."

We have all seen how that's turned out. I'm sorry, but doesn't this guy read prepared text from a teleprompter? He makes my doctor sound like a puppy. "Can I keep it, Barack? Please?"

"Since I've been president, federal spending has risen at the lowest pace in nearly 60 years."

Well...I guess adding $5 trillion to an already $10-trillion national debt in less than four years is merely responsible stewardship and not excessive. In any case, what does "lowest pace" mean? Can you have a low pace? Who is writing this stuff for him? Barack, I'm available...but no, I would just make you sound like an idiot, and you certainly don't need any help with that.

"And then you got their plan, which is let's have dirtier air, dirtier water, less people with health insurance."

Yes, that's it: people who disagree with your policies want dirtier air and water...and I would have said "fewer" people and "then you have their plan," but I'm not a genius like Barack.

"I'm pledging to cut the deficit we inherited by half by the end of my first term in office."

He has run deficits in excess of a trillion dollars in each of his years in office, while proposing budgets, which failed to garner a single vote two years in a row, including-trillion dollar deficits as far as the eye can see.

In 2007, the last year the House of Representatives and the Senate were under Republican control, the deficit was $161 billion. Who would have thought at the time that this was a high point, or something to aspire to?

Also, I probably would have said "in half before the end of my first term."

I know I'm just being petty, and with my grammar and syntax, who am I to throw stones? But it is so much fun after eight years of disquisitions on the dumbness of George W. Bush to now hear the most brilliant man to ever walk the face of the earth -- if you don't believe me, just ask him -- speak as if he is a tad simple, assuredly undeserving of his previous post as president of the Harvard Law Review.

My experience has been that speaking and writing correctly is a requirement of being an editor and a president...of anything, especially these Untied States of America. Perhaps Harvard lowered the bar for a man who, even then, was so obviously the epochal intellect of his era.

I could go on and on, but there are so many lies and only so much space. Besides, every time I list

another falsehood, a bell rings in my head and an angel gets his wings...see, this stuff makes me crazy.

He's the Humpty Dumpty of politics -- words mean exactly what he says they mean, nothing more and nothing less. I don't know about you, but right about now, I would dearly love a shot at cracking Humpty Dumpty's shell of lies. Then I would tell all the king's horses and all the king's men not to bother trying to put the pieces back together again, because the result will certainly be less than the sum of its parts.

What Barack Obama has done in three and a half years of his presidency is cut Americans off from promise. The promise of a better life was always a given in the pre-Barack era. But since his ascendency, the possibility of improving one's lot has been replaced with the realization that at best, we are all hoping to not suffer too much as we sink deeper into the Obama morass.

All this he has done with self-serving hubris in pursuit of his dream of a transcendent legacy. He wants his name emblazoned in the history books as the man who did...whatever...as long as it's there. And if people are not happy with the results, then too bad for them -- they don't count anyway when compared to who he is.

You see, what Obama has attempted to do is to destroy America's spirit. How else would we ever accept him as our savior? But what he will eventually find out, whether on this November 6 or four years later, is that Americans are a special lot. And when I say Americans, I mean anyone who stands up and says that he is American. I don't care where you were born or when you came here, or, as Barack Obama is fond of saying, "what you look like." We are tough and resilient; we will survive this most awful of presidents and keep the American dream alive -- as the last best hope for humanity.

Barack Obama may not know it yet, but he will never be more than a footnote in the saga of history's most open, most prosperous, and most successful experiment with freedom and liberty.

Obama may envision a legacy laden with accolades and accomplishment, but he will never be more than a demagogue -- who was lying to a nation and himself when he thought he was bigger than the dream.
Posted by Donna Sorensen/jas2maui at 1:54 PM

Posted by Donna Sorensen/jas2maui at 1:25 PM