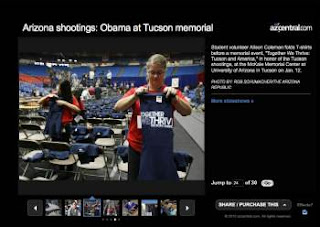 The presence of tee-shirts branded with the tragedy of last weekend’s Arizona shootings raised the eyebrows of many onlookers who worried the shooting was being subjected to politicization. A group of Arizona students has taken credit for the tee-shirt design and motto, but many are suggesting the “Together We Thrive” motto actually came from Organizing for America, the campaign arm of the Democratic National Committee.   Read More
Posted by Donna Sorensen/jas2maui at 2:17 PM

If you feel like you are being choked by Human BS

Posted by Donna Sorensen/jas2maui at 10:12 AM

How Americans Have Lost the Sense of Evil 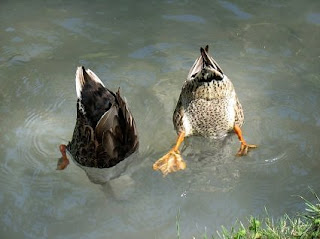 One of the first books that made me thirst for God was, ironically, about His polar opposite. The book is Andrew Delbanco's The Death of Satan: How Americans Have Lost the Sense of Evil.

The author describes the disastrous results of Americans rejecting the concept of evil. When Satan was alive and well, citizens practiced the Ten Commandments, atoned for their sins, and worried about eternal damnation. But today, inhabitants eschew the devil as an anachronism of days gone by.

And what has been the result of the death of Satan? More bloodshed than ever before in the history of humankind. In the 20th century alone, hundreds of millions of people were murdered by genocidal regimes.

And yet, why would banishing Satan result in a less civilized society? Because without an understanding about how good and evil work, people are stripped of Divine intelligence.   Read More
Posted by Donna Sorensen/jas2maui at 9:56 AM

Total Control Over The People 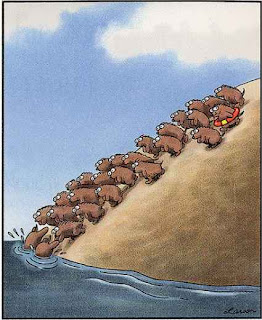 It just continues to get worse in Obama’s ‘syrupy’ manipulative way. His talk with folks in Arizona was nothing but a continued political campaign and war against conservatives. It was also an Obama worship shrine with bold emphasis on ‘togetherness’ and ‘consensus’ which is the new code speak for nothing but censorship!

In a time of tragedy where folks under normal conditions would benefit and desire inspirational and supportive words from their President, what did they get? T shirts placed on every seat saying “Together we Thrive.” That is nothing but a back handed insult and attack against the Tea Party folks and most of Americans these days that don’t want ‘together with him’ and what’s left of this radical administration’ anymore. The families of the victims and guests wanted to morn and honor the victims, not to be manipulated into another political rally for Obama and progressive leftists.

I heard a caller on talk radio call it perfectly when she said the push for consensus is really censorship. I couldn’t agree more. Now, the cuddly push for togetherness and unity is the classic, manipulative smoothness of most communist dictators, especially towards the beginning of total take overs. The idea is to get everyone on board to help the needy, the poor, the disenfranchised, the women, children and the elderly.

It is much easier to move the masses where you want, steal money and freedoms if people think in their hearts they are helping and doing the right thing for their country or ‘rock star’ leader. Once the manipulated folks start to get used to the smooth rhetoric, less money and freedom, like cattle they get used to being told what they will believe, what they will do and how they will spend what is left of their money. Is that what you want?  Read More

Posted by Donna Sorensen/jas2maui at 9:42 AM