Memorial Service a campaign rally or a rock concert

﻿﻿"From the start, the atmosphere resembled a collective exhibition of bizarrely inappropriate responses and paraphernalia."

Well, the cult members were out in full force tonight in Arizona. I was ashamed and disgusted by the spectacle that was called a memorial service.

President Obama's speech was fine, as always. He read the teleprompter with eloquence and did a fine chin in the air impersonation of Che Guevara, as usual. His words were appropriate for the most part and he rose above the political fray by making a point of chiding people that were playing the blame game.

My beef is not with Obama this time. It is his mindless minions in the crowd that draws my ire. Apparently the crowd was mainly composed of university students and from what I could gather they had already started tapping kegs for the wake.

This was more like an Arsenio Hall show than a memorial service. Catcalls, standing ovations, whistling and the whoop, whoop, whoop of the crowd dominated the night. What should have been a somber occasion for reflection turned into another Obama pep rally. It was as if these students had their guy up on stage and by God they weren't about to let a national tragedy get in the way of them having a good time and cheering on their messiah.

If these kids are our future then we are well and truly screwed.

I've just watched the "memorial" service for those killed and wounded in Tucson. How are we to explain the lack of decorum and reverence displayed by that audience? Did those students forget that the families of the dead and wounded were in the room? Do they not understand the meaning of the word "murdered"? Is not everyone who watched horrified by the whistling, hooting cheerfulness of that crowd?

The audience turned what was to be a memorial into something between a campaign rally and a rock concert. They should all be ashamed of themselves. The event called for honor and quiet respect, not hooting and hollering for a celebrity. Perhaps it was the free t-shirts that set the tone.  Read More
Posted by Donna Sorensen/jas2maui at 4:58 PM 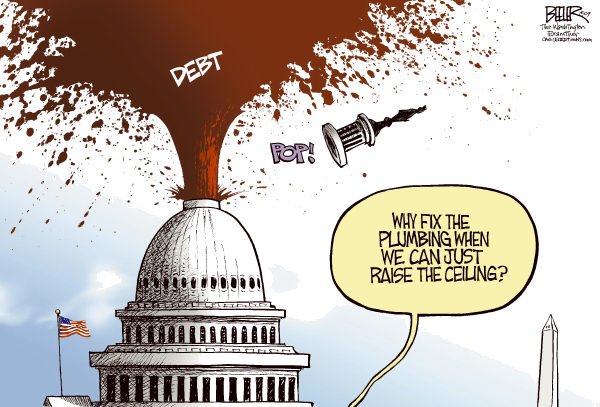 Has the mainstream gone Tea Party, or the Tea Party gone mainstream?  Despite warnings from the White House of the “deeply irresponsible” nature of “play[ing] chicken” with the national debt-limit ceiling, a Reuters poll of adults shows almost three-quarters of Americans opposed to further increases in the statutory borrowing cap.  Read More
Posted by Donna Sorensen/jas2maui at 1:36 PM

"Because in Obama's America, membership in an official elite trumps commonsense solutions, fact-based knowledge, and Judeo-Christian respect for individuals"

Ignorance. You gotta love it, because "ignorance" -- as seen by elitists -- is what will save the United States. Washington needs citizens of average intelligence who can take back government, a horde of drooling dimwits -- the kind that needs to be "nudged" into officially certified behavior by government dictate, says Obama's regulation czar and Harvard law professor Cass Sunstein -- to save it from the "smart" people. We're talking here of outside-the-Beltway dimwits that Time magazine columnist Joe Klein calls "too dumb to thrive" without the guidance of government-sanctioned behavior and policies such as carbon taxes, internet content restricted by regulation, and laws governing what and how much to eat.

Are you out of your mind, you ask? You want to turn Washington over to ordinary people, the stupid people "with short attention spans," as the sage of Yale -- also known as Senator John Kerry of Massachusetts -- sees them? Short answer: Yes. Long answer: Yes, because those considered dimwitted by our elites -- ordinary people with ordinary lives and ordinary education -- are savvy enough to defy what passes for wisdom in the New York-Washington corridor and recover both the soul and sense of a nation.
Read More
Posted by Donna Sorensen/jas2maui at 11:48 AM

The answer is: Those without shame

I'm retired now, but once upon a time, as a church pastor, I was called on to conduct funerals and memorial services. All too often.

I never saw them as opportunities to convert any possible unbelievers in attendance, exaggerate the virtues of the deceased, or advance some localized ecclesiastical agenda. That's not what they're about.

Funerals and memorial services are about looking beyond the moment where the cold immediacy of death has taken hold, and toward whatever divine, otherworldly, or transcendent beliefs are held by, most importantly, the family, but also their friends.

When the October 2002 memorial service for the late Senator Paul Wellstone (D. MN) turned into a political pep rally, many were offended. But who realistically expected it to be anything other than that? In that extravaganza, dignity was only moderately conspicuous by its absence. To paraphrase Rahm Emanuel: The goal is to never pass up an opportunity to take partisan advantage of a prominent politician's death.

It's happened again, this hijacking of mourning for political purposes, but this time the assault on dignity is more egregious. This time the props are innocent murdered civilians. And, this time they include a little girl.

Never mind what the President said last night. It was flat, harmless, boilerplate stuff, with no timeless, memorable quotes. It was the overall branding of the event, including special-event T-shirts (who bought them?), accompanied by applause as the various dignitaries entered the arena for the political theater, and the hob-knobbing that accompanies the gather of pols that collectively represented yet another amazing exercise of uncommonly bad taste by our political elite.  Read More
Posted by Donna Sorensen/jas2maui at 10:47 AM

The Power & Danger of Iconography

Posted by Donna Sorensen/jas2maui at 10:33 AM

Posted by Donna Sorensen/jas2maui at 10:30 AM

The following article points out once again the obvious.  The answer to the fate of America lies in the hands of God and the hearts and minds of each individual.  Many public figures are stating the same message.  Glenn Beck, in particular, has been fact by fact educating the public concerning the history and power of the progressive/socialist mantra.

HOWEVER...Quote from the following article..."Until the masses wake up and decide to heal themselves, nothing will change! Even with Limbaugh, Hannity, Ingraham, Beck, Savage, Larson and a whole host of other conservative talk radio and TV folks, the masses are still dumbed down and bought off, and big government, big banks, big business, big unions and the one-world-order crowd still rule the day."

Each week, this author and a close friend have lunch together and discuss the issues and events of the day, political and otherwise. These are constructive discussions, as it allow us to expand our perspective on those issues. Over the last several years we have covered lots of ground and when we think we have come up with a solution to one or more of America’s problems, we are brought up short on how to implement them. Identifying the problems is not all that difficult. Coming up with a politically palatable solution is outright problematical.

The other day he said: “You are a good writer, but for the last 4 years you have found a thousand ways to say the same thing.” After mulling his ego-deflating statement over a few times, the tone of our articles was indeed, similar from one to the other ….. a description of the problems, over and over again, but without plausible solutions. It would appear he was probably right. We had no defense.

On many occasions, we exchange e-mail messages with others on these very same issues and we can sense the frustration of those who are engaged in trying to make sense of what is going on and searching for workable solutions.

One gentleman said the other day in an e-mail, in part: “I would like to identify the enemy before the fight begins and I want to know that we are going after the root cause of our problems …….” A logical goal if there ever was one. “Know thine enemy.”  Read More
Posted by Donna Sorensen/jas2maui at 10:29 AM

January 13, 2011
by Mike Adams, the Health Ranger
Editor of NaturalNews.com

(NaturalNews) Following the unexplained deaths of several thousand birds over the last two weeks, events are now emerging that may offer a physics-based explanation for the mysterious deaths. It all begins on a runway in Tampa, where airport officials recently closed that runway in order to change the numeric designators painted there. Why are those numeric designators being changed? Because the Earth's magnetic poles are shifting and the numbers previously painted on the runway no longer match up with the magnetic measurements of sensitive airplane instruments (http://www.physorg.com/news/2011-01...).

The primary runway at the airport is designated 18R/36L, which means the runway is aligned along 180 degrees from north (that is, due south) when approached from the north and 360 degrees from north when approached from the south. Now the Federal Aviation Administration (FAA) has requested the designation be changed to 19R/1L to account for the movement of the magnetic north pole.  Read More
Posted by Donna Sorensen/jas2maui at 9:26 AM