BOOM!!!! Other Benghazi Shoe To Drop…GUNRUNNING – “Devastating to Obama and Hillary”

As the nation prays for the people decimated by the Midwest tornadoes, some in Congress continue to do the work of uncovering what really happened before, during, and after the Benghazi Massacre. Reports are now emerging regarding at least two more whistleblowers who have information that could prove “devastating” to both Barack Obama and Hillary Clinton…

More whistleblowers will emerge shortly in the escalating Benghazi scandal, according to two former U.S. diplomats who spoke with PJ Media Monday afternoon.

These whistleblowers, colleagues of the former diplomats, are currently securing legal counsel because they work in areas not fully protected by the Whistleblower law.

…Stevens’ mission in Benghazi, they will say, was to buy back Stinger missiles from al-Qaeda groups issued to them by the State Department, not by the CIA. Such a mission would usually be a CIA effort, but the intelligence agency had opposed the idea because of the high risk involved in arming “insurgents” with powerful weapons that endanger civilian aircraft. Read More
Posted by Donna Sorensen/jas2maui at 12:11 PM

Make IRS Criminal Actions be about Liberalism Not Obama

Let me be clear. I do not believe that President Obama will be impeached. He will never admit that he has done anything wrong. If there is any wrong-doing, others will take the blame (or be forced to take the blame).

The media will only go so far in attacking President Obama even though he disdains them and uses them for his own purposes. President Obama is anti-American, and that includes the freedoms found in First Amendment. The media do not care. Their religion is liberalism, and they will follow any god who proclaims it. Read More
Posted by Donna Sorensen/jas2maui at 11:15 AM

You WILL Affirm All Things ‘Gay’

In addition to the Benghazi cover-up, IRS targeting of political dissenters, and the illegal seizure of media phone records, whistleblowers within the Department of Justice (DOJ) have contacted Liberty Counsel to express grave concerns over this administration’s latest attack on freedom.

Our sources have provided Liberty Counsel an internal DOJ document titled: “LGBT Inclusion at Work: The 7 Habits of Highly Effective Managers.” It was emailed to DOJ managers in advance of the Left’s so-called “Lesbian, Gay, Bisexual, and Transgender (LGBT) Pride Month.”

Following are excerpts from the “DOJ Pride” decree. When it comes to “LGBT” employees, managers are instructed: “DON’T judge or remain silent. Silence will be interpreted as disapproval.” (Italics mine)

That’s a threat. And not even a subtle one.

Got it? For Christians and other morals-minded federal employees, it’s no longer enough just to shut up and “stay in the closet” – to live your life in silent recognition of biblical principles (which, by itself, is unlawful constraint). When it comes to mandatory celebration of homosexual and cross-dressing behaviors, “silence will be interpreted as disapproval.”

This lawless administration is now bullying federal employees – against their will – to affirm sexual behaviors that every major world religion, thousands of years of history and uncompromising human biology reject. Read More

Posted by Donna Sorensen/jas2maui at 10:04 AM

Is it time to consider a RICO case against the Administration? Administration using the apparatus of government as a tool of political repression and widespread corruption. 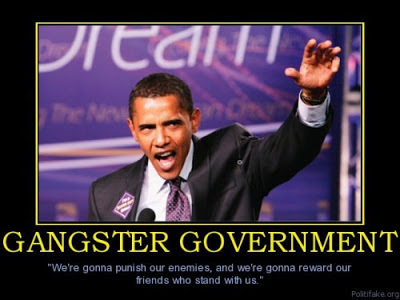 May 21, 2013
americanthinker.com
By Matt Holzmann

We are finding out new and interesting revelations about how our government operates every day, it seems. From an ever expanding IRS scandal to the Department of Justice's fishing expedition at AP to the President of the United States telling us that he found out about all of this in the newspapers just like the rest of us, it seems that everywhere we look there is evidence of the Administration using the apparatus of government as a tool of political repression and widespread corruption.

Think about it. It began with Czars and Czarinas unanswerable to anyone but the president and shielded from any form of oversight. Whole segments of the economy were reorganized behind closed doors, and GM and Chrysler bondholders and retirees were disestablished. The rule of law was damaged.

Then came the regular abuse of executive orders. As recently as last week his recess appointments of members of the NRLB was declared illegal. The Wall Street Journal wrote earlier this year:

"President Obama has shown increasing contempt for the constitutional limits on his power, and the courts are finally awakening to the news."

Early in 2009, the White House, in a conference call hosted by the National Endowment for the Arts urged grant recipients "to plug Barack Obama's domestic agenda". The Administration was called out on this and swiftly withdrew, but it seems that this administration is most adept at pushing the legal envelope.

They have broken new ground in an amoral overreach. Individuals and organizations have been targeted and harmed. The FBI, once the paragon of rectitude, has become an arm of the Obama Campaign.

The president, his press secretary, and his water carriers such as Barbara Boxer and Nancy Pelosi have made the most fantastic claims about the Benghazi investigation. HHS Secretary Sebelius is strong arming the pharmaceutical industry to fund Obamacare.

Everywhere we look we see what is more and more looking like a pattern of corruption.

Should we be surprised? For a politician who came out of the Chicago School, it is par for the course. Valerie Jarrett told us:

"After we win this election, it's our turn. Payback time. Everyone not with us is against us and they better be ready because we don't forget. The ones who helped us will be rewarded, the ones who opposed us will get what they deserve. There is going to be hell to pay. Congress won't be a problem for us this time. No election to worry about after this is over and we have two judges ready to go."

Sounds sort of like Al Capone. But this statement goes to the core of the Administration's philosophy. This how they do business.  Read More
Posted by Donna Sorensen/jas2maui at 9:47 AM