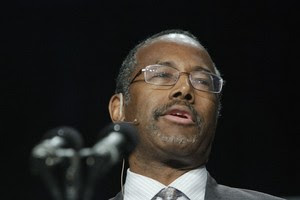 Whether this weekend finds you blowing two feet of snow off the driveway or counting the hours until "Downton Abbey," make time to watch the video of Dr. Ben Carson speaking to the White House prayer breakfast this week.

Seated in view to his right are Senator Jeff Sessions and President Obama. One doesn't look happy. You know something's coming when Dr. Carson says, "It's not my intention to offend anyone. But it's hard not to. The PC police are out in force everywhere."

Dr. Carson tossed over the PC police years ago. Raised by a single mother in inner-city Detroit, he was as he tells it "a horrible student with a horrible temper." Today he's director of pediatric neurosurgery at Johns Hopkins and probably the most renowned specialist in his field.

Late in his talk he dropped two very un-PC ideas. The first is an unusual case for a flat tax: "What we need to do is come up with something simple. And when I pick up my Bible, you know what I see? I see the fairest individual in the universe, God, and he's given us a system. It's called a tithe.

"We don't necessarily have to do 10% but it's the principle. He didn't say if your crops fail, don't give me any tithe or if you have a bumper crop, give me triple tithe. So there must be something inherently fair about proportionality. You make $10 billion, you put in a billion. You make $10 you put in one. Of course you've got to get rid of the loopholes. Some people say, 'Well that's not fair because it doesn't hurt the guy who made $10 billion as much as the guy who made 10.' Where does it say you've got to hurt the guy? He just put a billion dollars in the pot. We don't need to hurt him. It's that kind of thinking that has resulted in 602 banks in the Cayman Islands. That money needs to be back here building our infrastructure and creating jobs."

Not surprisingly, a practicing physician has un-PC thoughts on health care:

"Here's my solution: When a person is born, give him a birth certificate, an electronic medical record, and a health savings account to which money can be contributed—pretax—from the time you're born 'til the time you die. If you die, you can pass it on to your family members, and there's nobody talking about death panels. We can make contributions for people who are indigent. Instead of sending all this money to some bureaucracy, let's put it in their HSAs. Now they have some control over their own health care. And very quickly they're gong to learn how to be responsible."

The Johns Hopkins neurosurgeon may not be politically correct, but he's closer to correct than we've heard in years.