The most popular issues of Gullible Mind people 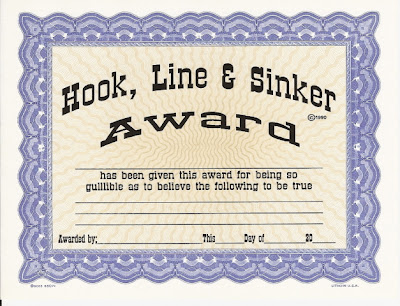 In light of the string of the blatant falsehoods being announced by the U.S. government these days (FDA, DHS, White House, etc.) it's interesting that so many people still believe whatever they are told by "official" sources. It brings up the question of the functioning of their brains: How could a person swallow official information so gullibly and so completely without even asking commonsense questions about the reliability or factual basis of that information?

These people, it turns out, are operating from what I called The Gullible Mind. It is a psychological processing malfunction that filters out information based on its source rather than its integrity. People who operate from The Gullible Mind tend to have misplaced trust in governments, institutions, mainstream news networks, doctors, scientists or anyone who wears the garb of apparent authority.

Whereas a normal, intelligent person would raise commonsense questions about information they receive from all sources, the Gullible Mind wholly accepts virtually any information from sources that occupy the role of apparent authority in society.

But how does this work inside their heads? It's an interesting process. Gullible Mind people do believe it is possible for a government (or institution) to lie; but they believe that governments, institutions and doctors choose NOT to lie even when it would serve their own self interests to do so. Follow this carefully, because this is the fascinating part.  Read More
Posted by Donna Sorensen/jas2maui at 10:13 AM 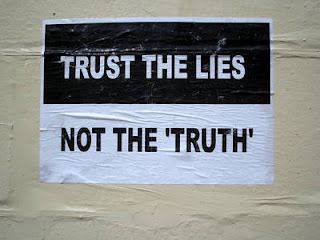 In a world where nobody seems to be telling the truth anymore we are often left with more questions than answers. Instead of just telling us the facts, everything seems to be about getting "the spin" right these days. For example, the Osama Bin Laden "death story" has already been changed by the White House multiple times. Fake Osama Bin Laden death photos (like the one above) have been flying all over the Internet. Massive amounts of radiation continues to pour out of the Fukushima nuclear complex in Japan and yet all the authorities continue to insist that it is nothing to worry about. The global economy is teetering on the brink of disaster and yet it is being called "an economic recovery". The U.S. government has essentially already reached the debt ceiling and yet now Timothy Geithner is claiming that it won't be a problem until August. The world is becoming a more bizarre place with each passing week, and the lies just keep on getting bigger and bigger and bigger.

The following are 31 interesting questions about some of the major events happening in our world right now....  Read More
Posted by Donna Sorensen/jas2maui at 9:38 AM 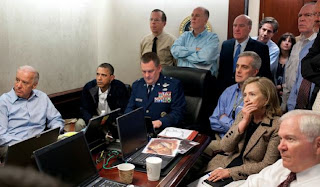 In addition to images of President Obama’s address to the American public on Sunday night, it has emerged that the dramatic photos of Obama, Biden, Hillary Clinton and members of the White House security team watching the assassination of Bin Laden “live” were in fact completely staged, casting further doubt on the ever-changing official account of the operation.

In one particularly dramatic photo, Hillary Clinton is seen with her hand anxiously clasped over her mouth as if reacting to a crucial event. Other photos show Obama and his staff with stern faces as they discuss the operation while it unfolds.

The photos were described by many as having “historical significance,” forming a “captivating” record of Obama’s greatest success and being the “defining moment” of his Presidency.

We were also told by the media that, “The leader of the free world saw the terror chief shot in the left eye.”

“US president Barack Obama along with his high-level team, watched live coverage in the White House, as the commandos gunned down the world’s most wanted terrorist Osama Bin Laden Via a video camera fixed to the helmet of a US Navy Seal,” it was also reported.

US chief counter-terrorism advisor John Brennan claimed that the head cameras that fed audio and video back to the White House, allowed Obama and his staff to track the operation “on an ongoing basis”.

But the claims have been proven to be completely fraudulent.  Read More
Posted by Donna Sorensen/jas2maui at 9:25 AM