Michelle Obama is Flat Out Lying

"All roads lead back to Chicago with this White House. Jarrett is the true power in the administration." 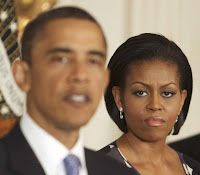 Our latest installment from our D.C. Insider states Michelle Obama is "flat out lying" about President Obama’s smoking habit, while also indicating a rift has already emerged between Valerie Jarrett and newly appointed White House Chief of Staff William Daley, and the possibility of a soon to come Congressional investigation set to rock the Obama administration.

Here is my take on the First Lady’s “Obama isn’t smoking anymore” comments this past week. Michelle Obama is flat out lying and this kind of lying has become terminal within the Obama White House. Is that direct enough for you? I know for a FACT the president did NOT quit smoking last year. Knowing that leaves me with the question of why Michelle Obama goes out and makes such a statement. That is the question you should have been asking. So why does she lie about her husband’s smoking habit? Certainly she is aware others know she is lying. So why do it? And if the president had in fact quit smoking after a 30 year habit, how in the hell does he manage to lose weight while doing so? The guy looks downright emaciated over the last year. And of course I’ve already spoken to what might be causing that.

Now this entire subject might seem on the surface to be somewhat unimportant, right? President Obama smokes or doesn’t smoke, who cares. Ah, but now add the First Lady making the issue a public lie regarding the subject. Why do that? One, I think this White House has become less and less concerned with the appearance of truth. They have already gotten away with so much, so many times, that they now are emboldened to say or do what they want even more, regardless of where the truth might fit in. Now THAT should be of great concern to everyone.

Second, and this is total speculation here on my part, that there is an ongoing dispute between the First Lady and the president over his “habits”, and she put out that public statement as some kind of passive aggressive power play. That is her motivation. I don’t want to start on the psychology of a wife who would do that to a husband, make his habits and struggles a matter of public record, but it is a weird thing to do don’t you think? Was the First Lady punishing the president? Hell if I know, but it was a weird thing to do because so many of us know that the president has not quit smoking since last year. And if the First Lady is so willing to lie about something so trivial as the president’s smoking habit, imagine what kind of other lies she is participating in. Or don’t imagine as frankly it might be just too -expletive- scary to consider.

Now to something more directly political. Received word that a rift is already developing between Valerie Jarrett and Bill D. Daley is worried Obamacare will be too easily used against the president in 2012 and wants to make drastic alterations to the legislation by the end of this year so it can be sold as more popular than it currently is.  Read More
Posted by Donna Sorensen/jas2maui at 11:45 AM