National ID Card In May

Warning to a Friend of Freedom: 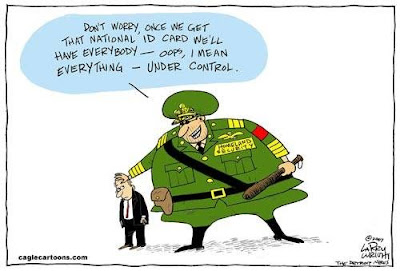 Even though no one on Capitol Hill is talking about it, unless it is stopped, in less than 90 days, you will be REQUIRED by federal law to have, and carry on your person, a “national ID” card in the form of a national drivers’ license. You know, the type of card the Nazi’s and the communists in the Soviet Union made people carry. In 1993 the Republican Congress referred to it as an “internal passport” when the Clinton Administration initially tried to create it—first as a national healthcare card, then as a “jobs card” to keep illegal aliens from stealing jobs from U.S. citizens and finally, in 1996, as a national drivers’ license.

Based on the provisions of The Real ID Act of 2005 (Public Law 109-13, 119 Stat 392), Barack Obama’s Department of Homeland Security will now require the federalization of State-issued driver’s licenses by May 11, 2011. Every State will be required to issue driver’s licenses that conform to new federal identification compliance “standards.”

Living in America, did you ever think you’d experience the invasive government, Big Brother tactics that we see in movies of Nazi Germany, in which uniformed officers demand: “Where are your papers?”

That is exactly what YOUR government is doing!

I am reminded of George Orwell’s riveting book, “1984.” Is “1984″ now upon us? The new national ID cards, disguised as a uniform drivers’ license, will be biometric. Each card will store personal data about the card holder. What information? Whatever the computer chip will hold—up to a gigabyte of data. And, each card will contain a GPS tracking chip. (Just in case someone steals your card, Big Brother will know, within 3 feet, where that card is at any moment.) George Orwell’s 1984 has finally arrived—and only 27 years late.

Please, CLICK HERE to FAX every Member of the U.S. Congress to tell them to STOP any form of National I.D. cards or National Drivers’ license. Tell Congress that the Real ID Act goes beyond constitutional limits, and that the American people will not be subjected to what amounts to an internal passport. Further, tell Congress that since the creation of a uniform, federal drivers’ license/ID card exceeds the financial limits established by the Unfunded Mandates Reform Act of 1995 (Pubic Law 104-4, 2 USC 1501), this law cannot be implemented because the cost exceeds the limits the federal government can impose on the States. Please help us fight this usurpation of YOUR privacy rights—and CHALLENGE an unlawful demand on the States. A substantial GIFT to AmeriPAC will help us fight what has already been costly war. But OUR PERSONAL FREEDOMS must be preserved.

WE NEED TO TAKE A STAND—WHILE WE CAN. THE CLOCK IS TICKING.