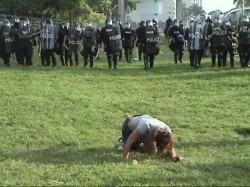 For a moment, imagine that you are awakened one night by a heavily-armed team of federal agents dressed in all black breaking into your home. As you confront them, they hand you a piece of paper that says that your son has been identified as a "terrorist" and that they are there to take him away. They pull your son out of bed, they throw him on the floor and the use a taser on him repeatedly. Then they handcuff him and haul him away without telling you a thing about where they are taking him. Your son suddenly has no rights because the Patriot Act supersedes the U.S. Constitution. That's right - because your son has been identified as a "terrorist" because of something that he has said on the Internet he no longer has any constitutional rights. Your underage son is held indefinitely and is subjected to "enhanced interrogation" because he has been identified as a "threat". You are not able to get your son back for years even though it turns out that he is completely and totally innocent. If you think that such a thing cannot happen to you then you are a fool, because this kind of thing is happening over and over across the United States and it is all legal because of the Patriot Act.  Read More
Posted by Donna Sorensen/jas2maui at 9:10 AM