The Selflessness of the Japanese Survivors

The Fukushima 50 and the White House Cipher 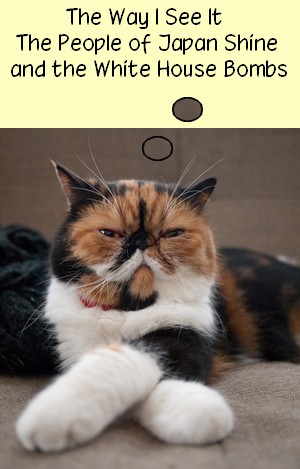 This was a week of enormous contrasts, in which we saw colossal courage and integrity and bravery on the part of U.S. troops and ordinary Japanese, and cowardice and childishness in the White House.

Battered by a devastating earthquake followed by a tsunami which has destroyed cities and apparently taken the lives of untold thousands of its people, Japan faced the possibility of even worse news -- a crisis in its Fukushima Dai-ichi nuclear plant, which if uncontrolled would wreak enormous additional damage, and which in any case will result in substantial energy constraints in a country with few energy resources of its own. One could only watch the horror and be stunned by the brave and civilized response of the Japanese nuclear technicians -- dubbed the Fukushima 50 -- who willingly risked their health and lives to save their countrymen. As this column goes to press it appears the Fukushima heroes may have succeeded in preventing the meltdown of the fuel rods under extraordinarily difficult conditions.

But the Fukushima 50 were not alone in bringing great honor to their people. So many people were displaced from their homes by the three events that shelters were inadequate to hold them all. Yet picture after picture of them revealed the slots had been given to the youngest and the most elderly and infirm, and the shelters looked clean and orderly, even if short of amenities. Everywhere in the areas involved food, clothing, water and, transport and medical supplies are inadequate. Even in Tokyo, supplies are dwindling, and as the weather is cold the lack of energy to heat homes coupled with frequent aftershocks most certainly be dispiriting. And yet...shops REDUCED prices of food and water when they had them; people waited in orderly lines to get what was needed; there are no reports of looting or mayhem, It is a moment every one of us who witnesses it from our distant, safe havens shall never forget.  Read More
Posted by Donna Sorensen/jas2maui at 12:34 PM