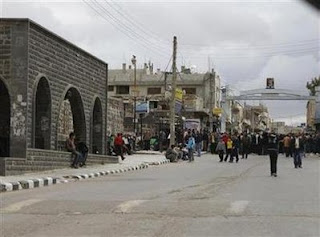 With the war in Libya set only to expand, the precedent of attacking a sovereign nation based on unverified reports, to then assist foreign funded, armed insurrection is already being used to lay the groundwork for a similar campaign against Syria. The “Libyan Precedent” was already an articulated doctrine within the corporate-financier think-tanks long before Joe Lieberman and Nicolas Sarkozy began parroting it in speeches and interviews.

In a February 26, 2011 Brookings Institute report titled, “Libya’s Test of the New International Order,” the intervention in Libya was described as “a test that the international community has to pass.” Failure would “shake further the faith of the people’s region in the emerging international order and the primacy of international law.” Succeeding, the report would go on to say, would “demonstrably draw a line in the sand to deter other Arab autocrats who resort to attacking their people rather than dialogue and genuine reforms.” Of course by reforms, Brookings means integration into the “international system” its corporate-financier sponsorship lords over.

In late March after bombing began in Libya, Sarkozy of France would echo Brookings’ sentiments stating, “Every ruler should understand, and especially every Arab ruler should understand that the reaction of the international community and of Europe will from this moment on each time be the same: we will be on the side of peaceful protesters who must not be repressed with violence.” He would go on to say there is a “new post-UNSC 1973 model of “world governance.”"  Read More
Posted by Donna Sorensen/jas2maui at 10:38 AM