Not So Fast, Mr. Obama: Trust But Verify 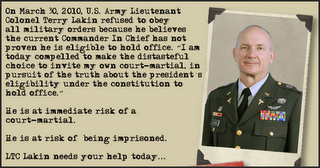 Yesterday, President Obama released a long form birth certificate. In doing so, he lectured Americans about what was truly important in America. "We do not have time for this kind of silliness," he intoned. "We've got better stuff to do. I've got better stuff to do. We've got big problems to solve, and I'm confident we can solve them, but we're going to have to focus on them, not on this." He then promptly boarded Air Force One to solve one of those vital problems -- by flying to Chicago for another appearance on Oprah's show.

Let's focus now on one very simple question: why did he fight not to release the long form birth certificate?
Read More
Posted by Donna Sorensen/jas2maui at 6:35 PM