Ron Paul: We Are Enabling A Future American Dictatorship 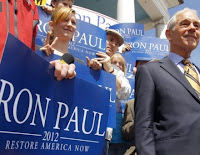 2012 Presidential candidate Ron Paul has warned that a lack of oversight from Congress, the media and the American people is enabling the rise of a dictatorship in the US.

The Congressman issued the warning via his weekly Texas Straight Talk column, noting that in light of current attitudes within the executive and legislative branches, “it would be incredibly naïve to think a dictator could not or would not wrest power in this country” at some point in the future.

“Americans who are not alarmed by all of this are either not paying close attention, or are too trusting of current government officials to be concerned.” Paul writes,

“Our Presidents can now, on their own: order assassinations, including American citizens; operate secret military tribunals; engage in torture; enforce indefinite imprisonment without due process; order searches and seizures without proper warrants, gutting the 4th Amendment; ignore the 60 day rule for reporting to the Congress the nature of any military operations as required by the War Power Resolution; continue the Patriot Act abuses without oversight; wage war at will; and treat all Americans as suspected terrorists at airports with TSA groping and nude x-rays. ” The Congressman urges.  Read More

Posted by Donna Sorensen/jas2maui at 11:21 AM