Trump Is Already Running the Country

"The U.S. Constitution requires that both parents be natural-born Americans." 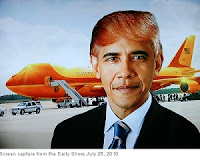 The cartoonist Fuller depicts the billionaire-builder Donald Trump dressed in a circus-master’s outfit and holding in one hand a red, white and blue megaphone and in the other hand a hoop blazing with a fire that says Birth Certificate Question through which a terrified and desperate Obama is leaping.

That about sums up what has happened over the past month or so, as Trump decided to ask the simple question legions of people have been asking and legions of lawyers have been waging lawsuits about for the past almost-three years: Where’s the birth certificate?

Instantly the craven media and assorted Hollywood types who have been effectively conspiring with Team Obama to keep all aspects of his life hidden from public view mobilized to quash Trump, as usual choosing Rule #12 from the Chicago Marxist Saul Alinsky’s famous book, Rules for Radicals: “Pick the target, freeze it, personalize it, and polarize it.” In essence, go after your enemy personally and not his business because people are more vulnerable and hurt faster than institutions.

But whoever was responsible for the vast media blackout on the birth-certificate subject never counted on a person like Trump, who is immune to intimidation or threats. In short, they were messing with the wrong person.

Here is but a small sample of how “in the bag” the media were – even before Obama tried to come clean:
Read More
Posted by Donna Sorensen/jas2maui at 1:17 PM