Stunning Map: Want to See Where the World’s Unrest is Spreading?

Business Insider published a map on Friday that caught the attention of Glenn Beck. And it should catch yours.

Below you’ll be able to see where in the world food riots are taking place. But not just food riots, you’ll also see where governments have been overthrown, where protests and other riots are occurring, where there’s inflation, and even where social media has been shut down. It’s a fascinating map.

But what may be the most interesting is that it seems like the unrest is spreading.

“Most of the inflation riots and protests are concentrated in the MENA (Middle East and North Africa) region,” EconoMatters writes on the Business Insider site, “but as you can see on the Google map, they are starting to migrate into Europe, as well as China and India.”

In the U.S., anemic growth, an ongoing housing depression, high unemployment and two rounds of quantitative easing (QE) probably have laid a pretty solid foundation for a similar riot map if Chairman Bernanke decides to grace us with QE3.

No longer, then, is the unrest localized to the “Arab Spring” countries from a few months ago. As Beck has talked about for a while, this could be the start of the “coming insurrection.” 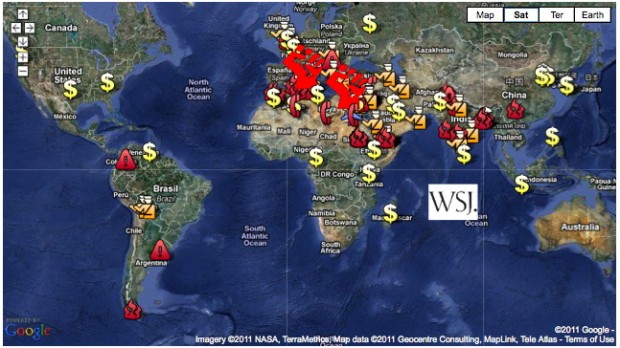 Posted by Donna Sorensen/jas2maui at 12:52 PM