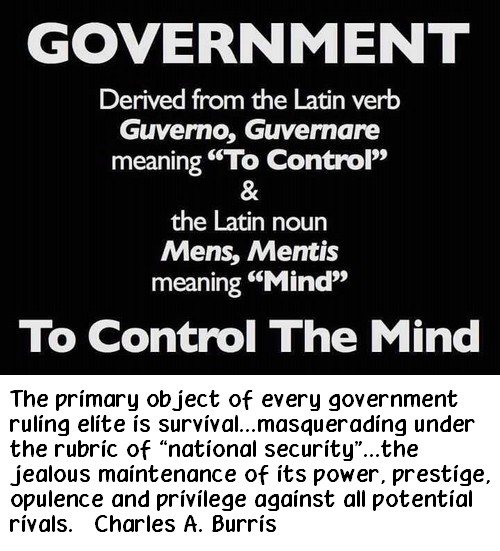 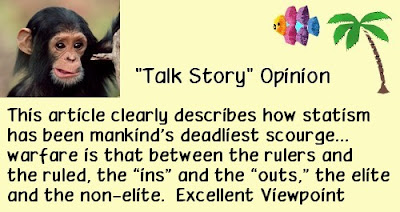 The primary object of every government ruling elite is survival — masquerading under the rubric of “national security” — the jealous maintenance of its power, prestige, opulence and privilege against all potential rivals.

Civilization is based on the fear of violent death. Thus concluded authoritarian political philosopher Thomas Hobbes in his famous Leviathan in 1651, written following the devastation and chaos of the English Civil War. Man’s fate without organized civil government was “solitary, poor, nasty, brutish and short,” Hobbes concluded.

Yet somberly reflecting upon the untold billions butchered over hundreds of centuries by the systematic slaughter of war, slavery, torture and famine, one must agree with Edmund Burke that, in fact, statism has been mankind’s deadliest scourge.

Burke, founding father of conservatism, in surveying man’s sordid record in his classic, A Vindication of Natural Society, in 1756 observed: “By sure and uncontested principles, the greatest part of the governments on Earth must be concluded to be tyrannies, impostures, violations of the natural rights of mankind, and worse than the most disorderly anarchies.” The cure was worse than the disease.

History has seen the unvarying, wearisome parade of one parasitic government succeeded by another for thousands of years. Is this the price we have paid for civilization?

While we eagerly await the welcome demise of a Nicolae Ceausescu, an Ayatollah Ruhollah Khomeini, a Ferdinand Marcos or Manuel Noriega, visible rulers are always vulnerable. It is in the hidden, murky political sub-strata where insurgency is born.

Despite their labeling, all governments are oligarchies. All states or regimes are characterized by the brutal struggle for power in its diverse open and concealed forms by competing elites. (Just ask former House Speakers Jim Wright and Jim Barker).

The most significant political division to be observed in such internecine warfare is that between the rulers and the ruled, the “ins” and the “outs,” the elite and the non-elite. The primary object of every government ruling elite is survival — masquerading under the rubric of “national security” — the jealous maintenance of its power, prestige, opulence and privilege against all potential rivals.

This rule is initially based upon naked force and fraud. Later, it is sustained by habituation to subjection and obedience by an elaborate formula propped up with a widely held ideology, religion, or myth.

“The devices — of bread and circuses, of ideological mystification and dependency — that all rulers today use to bamboozle and gull the masses have not substantially changed for centuries,” observed economist and political philosopher Murray N. Rothbard.

All governments, no matter how ruthless and despotic (or seemingly benevolent and just), rest upon this “engineering of consent” of the gullible majority, largely by the propaganda beamed at the populace by the rulers and their intellectual apologists in the complacent and compliant news media.

Governments do not remain in power except by the willing acquiesce and apathetic resignation of their subject peoples.

In 1989, we witnessed an elemental force of destructive fury spontaneously arise to cleanse the Earth of the barbarism of statism and its attendant corruption and predation. This hurricane-like ferocity is freedom, and its contagion is sweeping from continent to continent, nation to nation, person to person.

Freedom has always been the genius of American civilization; indeed, of all civilization. It is time for each of us, as Americans and, more importantly, as human beings, to solemnly renew our civic religious legacy, and swear in our hearts with Thomas Jefferson, “eternal hostility against every form of tyranny over the mind of man.”

It is time for each of us to be in the vanguard of this worldwide renascence of human liberty in the last decade of the 20th century, joining in solidarity with our brothers and sisters abroad in declaring war upon the state, all governments, as destroyers of rights and plunderers of the common heritage of humanity.

Charles A. Burris is a writer and political communications research consultant.
Posted by Donna Sorensen/jas2maui at 10:49 AM