"The reckoning is coming. It will be swift, and it will be terrible, and we will have only ourselves to blame." 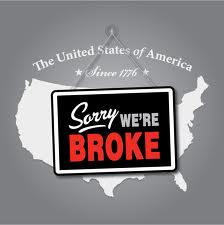 If you’re one of the lucky ones in these economically depressed times, you have a job that comes with a steady paycheck. (Nine percent of Americans or more have not been so lucky for twenty straight months.)

But even for the fortunate gainfully employed among us, the economic situation is more dire than many are remotely aware.

Take your yearly pay. Subtract your local, state, and federal tax burdens. Then deduct the amount you are paying to service your personal debt, including mortgages, credit cards, business or student loans, etc.

For a lot of Americans, after such a cruel calculus, their yearly income looks a lot smaller — perhaps barely adequate — even if one is pulling down a nominally “good” salary.

But the situation is even more alarming still: for the first time, our national debt has surpassed $14 trillion — a dubious and shameful record.

Even more astonishing, the past two presidents, one from each major political party, are responsible for half of that monstrous sum. As an Associated Press story noted, about half of today’s national debt was run up in the past six years. It soared from $7.6 trillion in January 2005 as President George W. Bush began his second term to $10.6 trillion the day President Obama was inaugurated and to $14.02 trillion now.

In this era of hyper-partisanship, it is comforting to know that there is one thing both parties have agreed upon — spending the nation into insolvency. Read More
Posted by Donna Sorensen/jas2maui at 9:05 AM