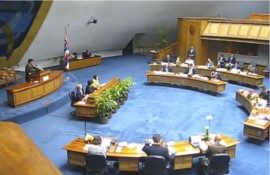 HONOLULU (AP) — Fearing a possible court challenge, Hawaii’s state Senate has voted to silence the daily prayer offered before each session began — making it the first state legislative body in the nation to halt the practice.

A citizen’s complaint had prompted the American Civil Liberties Union last summer to send the Senate a letter noting that its invocations often referenced Jesus Christ, contravening the separation of church and state.

That prompted the state attorney general’s office to advise the Senate that their handling of prayers — by inviting speakers from various religions to preach before every session — wouldn’t survive a likely court challenge, said Democratic Majority Leader Brickwood Galuteria.

“Above all, our responsibility is to adhere to the Constitution,” Galuteria said after Thursday’s vote to halt the daily blessings.  Read More
Posted by Donna Sorensen/jas2maui at 5:35 PM