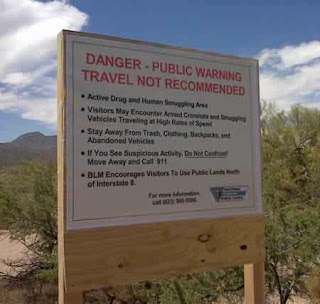 Incredibly, the White House has sided with a foreign power against a state that it is invading and colonizing, rendering the contract between the federal government and the states null and void — yet there has been no move to impeach our treasonous rogue president. But at least Arizona Governor Jan Brewer is putting up a fight in the courts:

Gov. Jan Brewer sued the federal government Thursday for failing to control Arizona's border with Mexico and enforce immigration laws, and for sticking the state with huge costs associated with jailing illegal immigrants who commit crimes.

The lawsuit claims the federal government has failed to protect Arizona from an "invasion" of illegal immigrants.

What's with the sneer quotes? You would have to be more clueless than Bureau of Land Management bureauweenies not to know that Arizona has been subjected to an invasion.

Brewer's suit serves as a countersuit to blockage of SB1070 by Obama's Injustice Department.

Arizona's enforcement law was passed amid years of complaints that the federal government hasn't done enough to lessen the state's role as the nation's busiest illegal entry point. Its passage ignited protests over whether the law would lead to racial profiling, and prompted lawsuits by the Justice Department, civil rights groups and other opponents [including the Mexican government] seeking to have it thrown out.

If Obama's alliance with Mexico against Arizona doesn't make it clear that he is not governing in the best interests of the United States, what would?
Posted by Donna Sorensen/jas2maui at 12:15 PM