Violation of states’ rights and the Constitution

Obama Wants Control Over Each State AND the Country – What State’s Rights? What Constitution? 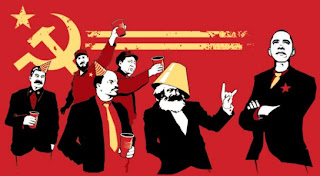 This country is becoming one big pot for our usurper president and imminent dictator. He shows his ignorance and unfamiliarity with the United States Constitution when he starts telling state Governors how to run their provinces which THEY were duly elected to govern.

This man who stole his way into the highest office in this land is either the most brazen, or the most stupid, or perhaps equal parts of each, iconoclast or rule breaker.

His position and statements against the elected authority of the Governor of the State of Wisconsin, Scott Walker, are a violation of states’ rights and the Constitution and are absolutely out of order; a brazen attempt to coddle labor unions as payback for the many millions of dollars of their members’ dues money that they used to get this charlatan elected in 2008.

Unions have outlived their usefulness and have become rotten and corrupt to the core by stealing the dues money their members pay for their illicit activities not the least of which is currying favor with highly elected officials in return for favorable assistance from those officials to gain added advantages in the union workplace through strong-arm and illegal tactics.  Read More
Posted by Donna Sorensen/jas2maui at 11:01 AM