Selected characteristics of a homegrown terrorist: personal peak into the everyday existence 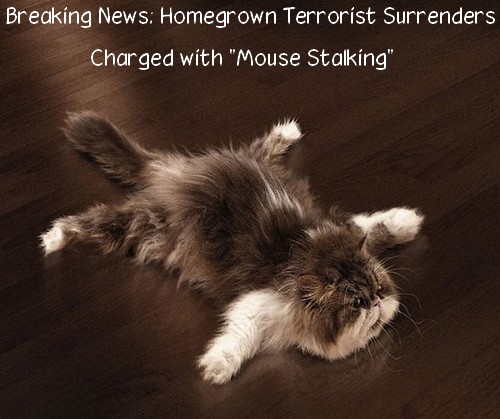 This is part of the article in the previous post...A Day In The Life Of A “Homegrown Terrorist”


For all you terrorism voyeurs out there, let’s delve into the deep dark recesses of the life and psyche of the average establishment nominated homegrown extremist…

7:00 AM: I wake up this morning and every morning with thoughts on how I may better expose the Federal Reserve and the fetid, morally bankrupt corporate bankers who constructed it. Drink orange juice. Change out of my Gadsden Flag pajamas and jump into the shower. Sing the lyrics to Jimi Hendrix’s ‘All Along The Watchtower’. Rinse. Repeat.

8:00 AM: I jot down my immediate thoughts for the next terroristic macroeconomic analysis article I plan to complete later in the day with my long horrifying trigger happy terrorist fingers on my terrorist built supercomputer. I also eat a blueberry muffin, probably heated to sumptuous perfection by bakers of the terrorist persuasion. As you know, we are everywhere. Booga booga…

9:00 AM: Go out for my five mile jog. Have to stay in tip top condition if Homeland Security plans to hunt me down for all those goods and silver I’ve been trading on the evil right wing extremist ultra maxi secret black market. Flea markets, farmers markets, garage sales, private exchanges of eggs and milk, all under the nose of the IRS! You name it, I sully the “pristine” nature of the Federal Reserve system with it.

10:00 AM: Arrive at my day job where I talk to fellow employees and even employers CONSTANTLY about the stagflationary threats to the U.S. economy, the inherent tyranny of the central banking philosophy, the complete idiocy of the Keynesian methodology, the risk of Treasury depreciation and the loss of the greenback’s world reserve currency status, along with the need for sound money initiatives, localized commerce, state sovereignty legislation, and personal defense. Somehow, they have not yet realized that I am a terrorist. Mark Potok needs to get his message out there more effectively…

6:00 PM: Arrive home from a hard day’s work. Make dinner devoid of artificial sweeteners, chemical preservatives, and high fructose corn syrup. For some reason, I care about my overall health and shudder at the prospect of feeding from the corporately produced slop trough, which only seems to slowly morph any unsuspecting human being into a 300 pound boil infested bottom feeding kankle troll with the logical and intuitive capacity of a sea monkey. Watch rerun of Three’s Company (Hey, that show is funny…)

7:00 PM: Sink into couch for some much needed rest.

7:15 PM: Get up off of couch and start my second job as a terrorist writer. We are indeed relentless.

11:00 PM: After spreading my vicious propaganda about how the leaderships of both major political parties support nearly the same exact legislation and only seem to disagree in rhetoric, or when the particular issue is ultimately unimportant to the progression of globalization, as well as the inevitable downfall of the American financial system facilitated by the deliberate creation of the derivatives crisis by the Federal Reserve and global banks like JP Morgan, Goldman Sachs, HSBC, etc, I then have a shot of whiskey. Sometimes its depressing being a terrorist, and you have to take the edge off.

12:00 AM: I now answer many emails from other would be terrorists across the country who have been wiled by the undeniably rich and sexy allure of the lifestyle. Being labeled a terrorist is truly fun and exciting. Being constantly aware of the Godzilla-like rampage of international banks and the Fed across the ruins of our monetary system while half of the public is more concerned about what kind of Gordita they want from Taco Bell is immensely comforting. All the extra attention we receive from such highly placed individuals as Janet Napolitano makes us feel like celebrities. I imagine any group in history who has been singled out by government for their political and social views or their desire to fix the obvious inadequacies of their authority structure has felt the same way……fabulous.

1:00 AM: Time to sleep. Warm milk? Check. Air conditioning at optimum temperature? Check. Bed spread neatly folded for easy access? Check. Low playing mood music? Check. Loaded semi-automatic pistol under pillow? Check. (This is actually true in some cases, and you know what? I salute those people.) Commence operation Sheep Count. Try to supplant the concerns and the tensions of a world tomorrow that could be drastically different and even more frightening than the one we live in today. Worry that I should be sleeping less and working more to prepare others for what is coming. Hoping that my belief in the greater potential of mankind is not a waste, and that my efforts will yield something better for those generations that follow my own. Yes, I am an extremist, and a deviant. I will never stop pursuing the tidings of liberty, regardless of the cost. I am a madman. However, this makes me wonder, what does it mean to be deemed a madman in a society run by madmen? What does it mean to be judged a deviant in a nation dominated by deviants? Why is it that a so called “terrorist” in an atmosphere of dread and tyranny always seems to end up being but a man who only seeks to be free?


Neithercorp is starting a new Fundraising Drive for our barter networking and trade website Alt-Market.com! We need your help to promote private barter economies across the country. If you would like to contribute to the fundraising drive, visit our donate page here:

Or, stay tuned for more information on the purpose of the drive itself.
Posted by Donna Sorensen/jas2maui at 12:05 PM