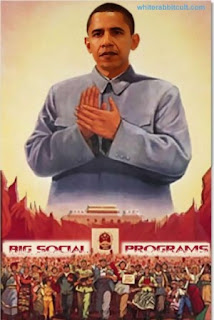 It Was Historic: Obama Cheers Maoist Song at WH State Dinner & Praises Commie China In SOTU… All in One Week

The Obama regime has been in office only two years and already they’re playing Red Chinese anti-American commie songs at State Dinners in the White House.

The US was humiliated in eyes of Chinese by a song used to inspire anti-Americanism at the Obama State Dinner for Hu Jintao.
The American reported, via Instapundit:

During the dinner’s musical interlude and following a duet with American jazz musician Herbie Hancock, Chinese pianist Lang Lang treated the assembled dignitaries to a solo of what he described as “a Chinese song: ‘My Motherland.’”

The Chinese delegation was clearly delighted: Chinese President and Communist Party chief Hu Jintao, stone-faced for many of his other photo ops in Washington, beamed with pleasure upon hearing the melody and embraced Lang Lang at the song’s conclusion (see it on YouTube too). President Obama, for his part, amiably praised Lang Lang for his performance and described the event as “an extraordinary evening.”
Read More
Posted by Donna Sorensen/jas2maui at 9:41 AM