Oil prices continue to rise at a rapid pace

5 Dollar Gas? Get Ready To Pay An Arm And A Leg For Gasoline 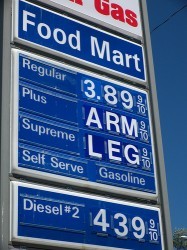 One of the quickest ways to bring down the U.S. economy would be to dramatically increase the price of oil. Oil is the lifeblood of our economic system. Without it, our entire economy would come to a grinding halt. Almost every type of economic activity in this country depends on oil, and even a small rise in the price of oil can have a dramatic impact on economic growth.  That is why so many economists are incredibly alarmed about what is happening in the Middle East right now.  The revolution in Libya caused the price of WTI crude to soar more than 7 dollars on Tuesday alone.  It closed at $93.57 on Tuesday and Brent crude actually hit $108.57 a barrel before settling back to $105.78 at the end of the day.  Some analysts are warning that we could even see 5 dollar gas in the United States by the end of the year if rioting spreads to other oil producing nations such as Saudi Arabia.  With the Middle East in such a state of chaos right now it is hard to know exactly what is going to happen, but almost everyone agrees that if oil prices continue to rise at a rapid pace over the next several months it is going to have a devastating impact on economic growth all over the globe.  Read More
Posted by Donna Sorensen/jas2maui at 10:37 AM