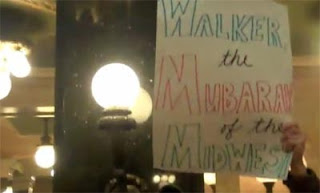 The hypocrisy of the American left is on full display in the heart of America, as the teachers’ union in Wisconsin continues to show how it will use any tactic, no matter how reprehensible, to try and get its way. Threats, intimidation, violent imagery and inflammatory rhetoric – all of the sorts of tactics that the left and the mainstream media routinely accuse conservatives of using – are on full display in Madison. But, rather than condemning such behavior, left wing champions from Barack Obama to Michael Moore are falling over themselves to show solidarity with the teachers’ union.

Protesters carried signs likening Wisconsin governor Scott Walker to Adolf Hitler and Hosni Mubarak. One protester carried a placard that posed the question “why do Republicans hate people?” while others likened Walker’s budget cutting efforts to rape. He was called a dictator by some and an image of the governor was overlaid with crosshairs by at least one protestor. A rent-a-mob marched on the governor’s home. None of this behavior seems to bother leaders on the left, no more than the same kind of extremist rhetoric and actions concerned them when the left directed it towards George W. Bush for the better part of eight years.

Wisconsin state senator Randy Hopper, a Republican, told National Review that he and his colleagues have been receiving threats of a physically violent nature, and that law enforcement has stepped in to protect the homes and businesses of Republican legislators in the Dairy State. And how does the President of the United States react to all this? Barack Obama, after all, called for more civil and respectful political debate in America just a few short weeks ago. Here’s what the President had to say  in an interview with Milwaukee’s WTMJ:   Read More
Posted by Donna Sorensen/jas2maui at 9:42 AM