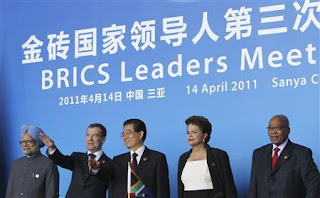 (Reuters) - The BRICS group of emerging-market powers kept up the pressure on Thursday for a revamped global monetary system that relies less on the dollar and for a louder voice in international financial institutions.

The leaders of Brazil, Russia, India, China and South Africa also called for stronger regulation of commodity derivatives to dampen excessive volatility in food and energy prices, which they said posed new risks for the recovery of the world economy.

Meeting on the southern Chinese island of Hainan, they said the recent financial crisis had exposed the inadequacies of the current monetary order, which has the dollar as its linchpin.

What was needed, they said in a statement, was "a broad-based international reserve currency system providing stability and certainty" -- thinly veiled criticism of what the BRICS see as Washington's neglect of its global monetary responsibilities.

The BRICS are worried that America's large trade and budget deficits will eventually debase the dollar. They also begrudge the financial and political privileges that come with being the leading reserve currency.

In another dig at the dollar, the development banks of the five BRICS nations agreed to establish mutual credit lines denominated in their local currencies, not the U.S. currency.  Read More
Posted by Donna Sorensen/jas2maui at 9:47 PM